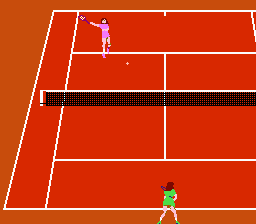 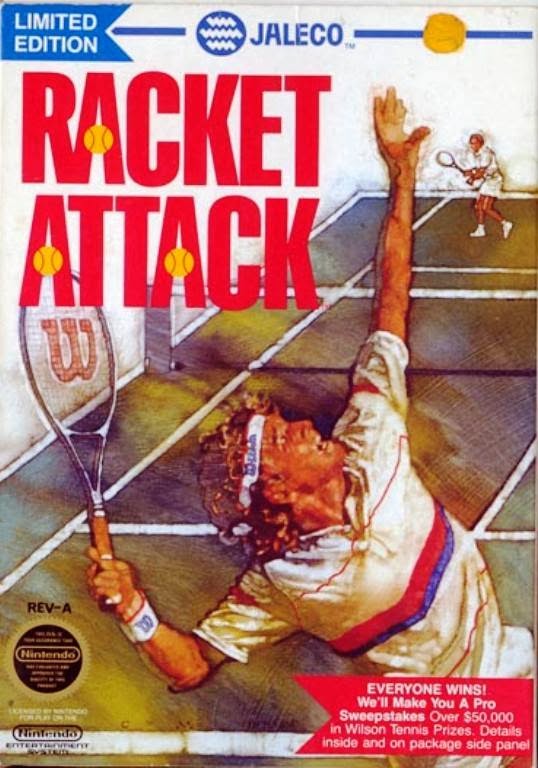 A tennis game called Racket Attack? I suppose that makes sense, even if it is a little boring. In my opinion, Racket Attack should be about an old man, embittered by neighborhood kids constantly making too much “racket.” As a result, you’re unable to enjoy “Jeopardy!” or your afternoon soup supper in peace, thus leaving you no choice but to… Attack! Or, moving a tad closer to normalcy, Racket Attack could be the name of a Pro Tennis fighting game, sponsored by the USTA – Andre Agassi’s Racket Attack! Anything other than regular tennis would have been great. Unfortunately, I lack the power to go back in time and convince Jaleco otherwise, so tennis it is.
Racket Attack gives the player more options than most NES tennis games, but the actual tennis playing feels stiff and unwieldy. There are three different types of tennis courts, clay, hard, and grass. I played on the clay and grass courts and didn’t see much of a difference, but supposedly, the hard courts are where the balls will bounce the highest. You also have your choice of sixteen fake tennis players – eight men and eight women – and each one has perks. In one match, I played as Brofsky (male), whose foot work and rally shots are the talk of the courts. In a different game, I played as Orchler (female), whose speed and stamina leaves the other gals fuming. Neither player felt very different. Orchler was definitely faster, except when she swung at the ball. Brofsky was unremarkable in all things, including his swing. This was my biggest issue: neither players’ swing was good. They could serve fast, they could move fast, but they couldn’t swing fast, making each match incredibly difficult (more like Racket Take Your Time). Unless you can deduce where the ball is going to land each time (made more difficult by TOSE’s “dynamic” camera angles that slow down the gameplay), Racket Attack will infuriate you. I want my old-man-runs-amok game!
C-
The following two tabs change content below.