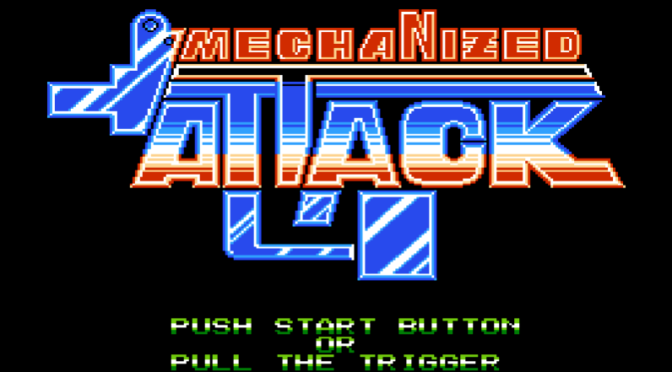 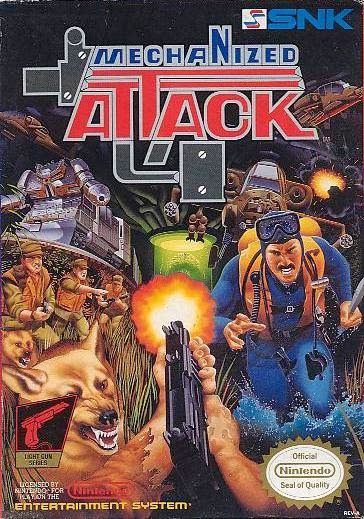 I’ve had a vendetta against dogs and divers for years… 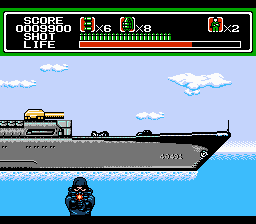 In the late 80s and early 90s, the arcade scene was exploding with shooting games. These were games that allowed you to use realistic replicas of guns in order to shoot whatever was on screen. They were ridiculous quarter munchers that allowed you to feel like a badass with a gun in your hand for as long as you could survive. With the Zapper, then, one would think that the NES would be rife with arcade shooting game ports, but sadly, this was not the case. Thank God, then, for games like Mechanized Attack. SNK’s corpse-fest may not be perfect, but at least it’s a break from duck hunting, clay shooting and Hogan’s Alley.
Yup, it’s you against the world in Mechanized Attack. Equip your Zapper (or controller – equal opportunity shooting) and go to town. You have about nine cases of bullets, which you can replenish by shooting bullet icons. There are also grenades and rockets for bosses and larger enemies. Each level auto-scrolls you through jungles, trains, sewers, and delivers an onslaught of crap for you to shoot. There’s always at least three soldiers or robots or dogs for you to shoot on the screen at any given time, and the second you shoot ’em, they’ve already been replaced. I can’t remember the last time a NES game forced me to concentrate as much as Mechanized Attack has. It’s easy to get overwhelmed, but thankfully, plentiful continues will ensure you see the end credits in an afternoon or two. Perhaps the only improvement SNK could have made was a two-player option. Who wouldn’t want double Zapper action? Nevertheless, Mechanized Attack is the rare Zapper game that actually feels like a game and not a tech demo. For that, we should be thankful.
B
The following two tabs change content below.