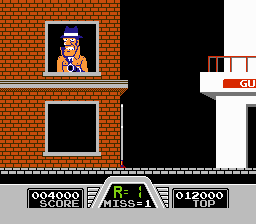 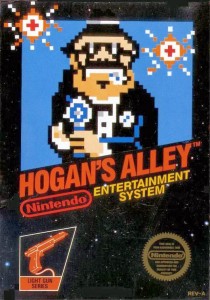 He’s really upset that you’ve decided to purchase this game.

Look out! He’s got a cannon and he’s not wearing a shirt!

Hogan’s Alley is one of the original eighteen launch games, one of the first games to use a Zapper, and one of the many NES launch games to, as of 27 years later, be incredibly boring. The entire game is essentially a training simulator. Shoot the bad guys that pop up on screen (men with sunglasses, large ugly faces, and guns), don’t shoot the good guys (cops, Joe Shmo reading a paper, random woman). You have two options to shoot these cardboard cutouts: one is an indoor training simulation (like cops would use, I suppose) which shuffles a mix of three random people, good and bad, in front of you; the other takes you on the “streets” and has you shoot the bad guys as they appear. Each round recycles the same backgrounds over and over again a la Urban Champion or Duck Hunt. I understand this was 1985 and people were used to repeating environments and the same gameplay round after round, but other games would usually throw out some amount of variety. Hogan’s Alley doesn’t even try.

Luckily, if you get tired of shooting the same bad guys in the same tired environments, there’s also Trick Shot, the most interesting of the three options. The game will throw out several tin cans from the right hand side of the screen, and the goal is to shoot them to the opposite side of the screen to get points. The lower the cans land on the left side of the screen, the more points you get. The reason Trick Shot is entertaining is because there’s simply more to do. Shooting several cans at once is, yes, TRICKY, especially if you want to get as many points as possible. Still, Father Time has left this game behind. There’s no replay value and very little fun to be had down Hogan’s Alley .