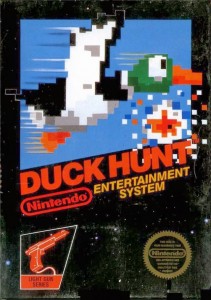 Expect some snarkiness from your dog for that missed shot. 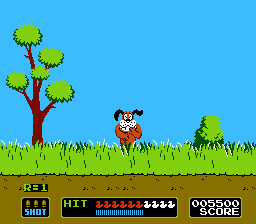 Many people remember Duck Hunt as the second game they ever played, after Super Mario Bros. For those that grew up with the combo cartridge, Duck Hunt was seen as the game you played when Super Mario Bros. became too difficult. It introduced the Zapper peripheral which, along with the ROB Robot, started the proud tradition of quirky, but useless Nintendo peripherals (Donkey Konga Bongos anyone?). The game itself inspired all the Cabela’s Hunting crap we see today, but Duck Hunt actually contains charm. The duck’s expressions when you shoot them are fantastic, as are the flying and falling animations. Who can forget the dog that laughs at you when you miss a shot and the anger you feel when you realize you can’t shoot your dog for laughing at you? The clay pigeon mode is more straightforward, but is also more challenging – if you’re actually trying to play fair and shoot them from a distance. Despite the game’s iconic art style and ability to inspire nostalgic memories in Generation Y, it’s very much an early NES game. You can play it for ten minutes and get the full Duck Hunt experience. It’s worth revisiting if you want to initiate your own child in the ways of the hunt, or if you yourself need to forget the bleakness of life and become a kid again. Just don’t expect to linger here.
C+
The following two tabs change content below.