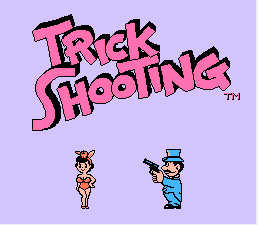 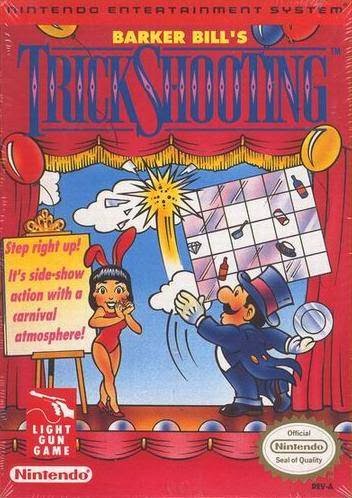 At least the cover is accurate. It really is that bland. 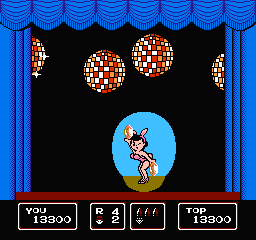 I think this screenshot is your reward for shooting all of Mario – er, Barker Bill’s kitchenware.

I always wanted to play more Zapper games when I was a child. All I had was Duck Hunt, which is what every kid had. Sure, it’s fun shooting ducks and clay frisbees, but after years of piled up carcasses and broken clay, I wanted more. Barker Bill provides “more”: instead of ducks, balloons; instead of clay, plates. Bill a.k.a. Mario also throws in some hammers, shoes, among other things, but it’s essentially Duck Hunt gameplay transferred into a carnival setting.
There are four different categories: Balloon Saloon (no drinking allowed – this is the NES), Flying Saucers, Window Pains, and Fun Follies. The first game is self-explanatory – shoot the balloons – and the rest aren’t difficult to comprehend. In the second category, Mario and his bunny assistant throw plates into the air – better shoot ’em! In Window Pains (delicious pun), you must shoot items that fall in between closed and open window panes. Shoot, I say! And in Fun Follies, it’s a combination of all three. There are “rounds” in every category, but as far as I could tell, rounds just keep on going until you lose all your lives. If you miss shooting something, you lose a life.
At least killing cartoon ducks was comical, and remains so to this day. The dog who laughs at you is also one of the unsung characters in the Nintendo canon. But where, I ask you, is the fun in shooting everyday household objects on your NES? If I wanted to do that, I could take some fine china onto someone else’s property and start shooting away. I might even get shot at! Now that sounds like a real adventure!
C-
The following two tabs change content below.