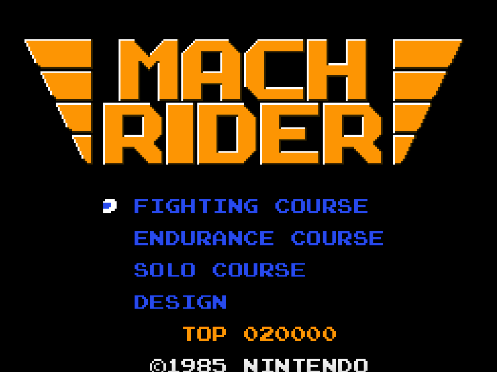 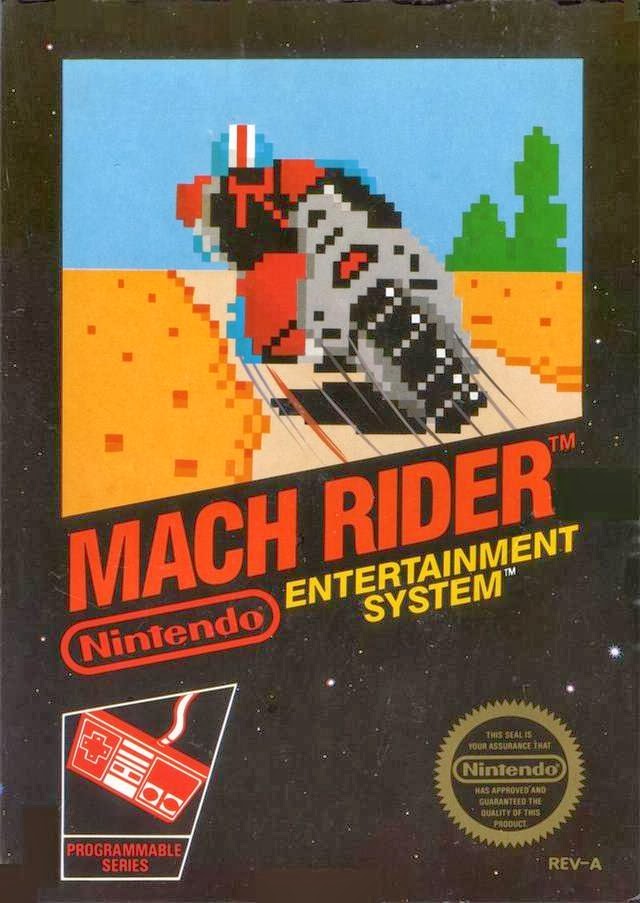 You’se a big, fine, Rider, won’t you back that thing up… 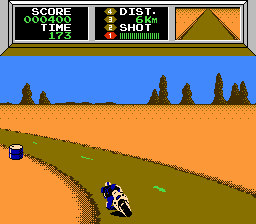 Desert racing is always the most extreme.

As ground-breaking as Mach Rider probably felt in 1985, with its behind-the-cyclist view-point, impressive graphics, and surprisingly fast sense-of-speed, Excitebike – two-dimensional cartoony cycling at its arguable finest – has all but eclipsed Mach Rider in Nintendo aficionado’s minds. Still, even though both games were original launch titles, comparing Mach Rider to Excitebike doesn’t feel entirely fair. Yes, both are motorbike games, and yes, both have an option to let you design your own courses, but that’s where the comparisons end. There’s a sense that Nintendo R&D 2, the developers of Mach Rider, really wanted to test the limits of the then brand new Nintendo. If that is the case, Mach Rider is a success.
Next to Super Mario Bros, out of all the launch games I’ve played, Mach Rider feels the most forward-thinking for 1985, both in terms of gameplay and graphics. You control a motorcyclist who can go insanely fast, while shooting other cars and obstacles on the road. Where Mach Rider stumbles is its execution. The game is just too fast for its own good. Unless you’re able to see through time and know what oil slicks or rocks or whatever obstacles are coming for you, you are guaranteed to crash time and time again. This isn’t a big deal on the Endurance races or the Solo Races, but if you’re playing for keeps with the big boys in the Fighting Course, you’ve got a set number of lives. Shooting at all times isn’t recommended, either, as you have a limited amount of bullets. Even with the choppy execution, Mach Rider is fun and shouldn’t be overlooked.
So why don’t more people recognize Mach Rider for what it is? Simply put, Excitebike is the better game. It has an endearing (and enduring) cuteness that completely eclipses Mach Rider‘s soulless, futuristic landscapes. Excitebike also bears the hallmarks of the tried-and-true Nintendo classics. It’s simple, charming, infinitely replayable. It’s a classic. Mach Rider is not. It’s second-tier Nintendo, but that’s still nothing to be ashamed of.
B
The following two tabs change content below.