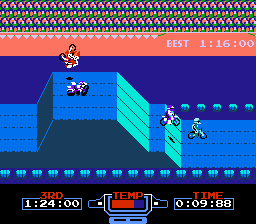 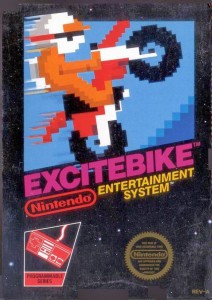 Why yes, it does feel good to be a gangsta. Thank you for asking! 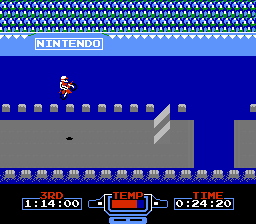 I predict the most wonderful amount of chaos on this track.

Excitebike is a racing boss. Forget a “Cool Runnings”-esque underdog, like Jamaica. Excitebike is, in the words of Sanka, “the damn Swiss”: unbeatable in its time and one of the best racing games on the NES. Amazingly, it was a launch title that, along with Super Mario Bros, really displayed the power and uniqueness of Nintendo, both as a software developer and a hardware maker. If you grew up with this game, as I did, who didn’t love just going really fast and crashing? When I was a kid, I’d bust a gut laughing, as I watched the poor racer and his bike twist and twist and twist over the platforms. “Selection B” which adds other computer racers to the soiree, triples the amount of fun one can have with crashing.
Once one grows older, however, and the novelty of watching a Lego man crash and burn thousands of times has worn thin, the actual game beneath the bloody guts is quite fun. While there are only five tracks, each one has its own unique twists and turns. The difficulty varies, but the challenge is fairly solid throughout (especially if you want to be #1 on the 3rd track – one minute and ten seconds for top time?! Yeesh!). “A” is accelerate, “B” is your turbo, but you have to watch your temp so you don’t burn out your engine (turbo is a harsh mistress). As previously mentioned, “Selection B” on the title screen adds three more players to the same five tracks. They exist more to get in your way than they do to “beat” in the traditional sense, but they do make the game more difficult. And, for those budding architects/engineers/whatever, you could build your own tracks! And they could go on forever! You couldn’t save them, but hey, this was 1985.
My only real beef with this game is its lack of a two-player mode, as Excitebike was made for it. Despite this, Excitebike has a distinct charm and significant replay value, unlike the majority of the NES launch titles. This is why Nintendo recently updated Excitebike for the 3DS and why the majority of retro gamers still uphold it as a rightful classic twenty-six years later.
A
The following two tabs change content below.