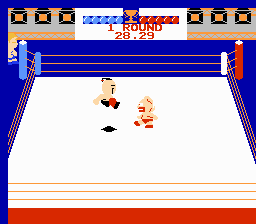 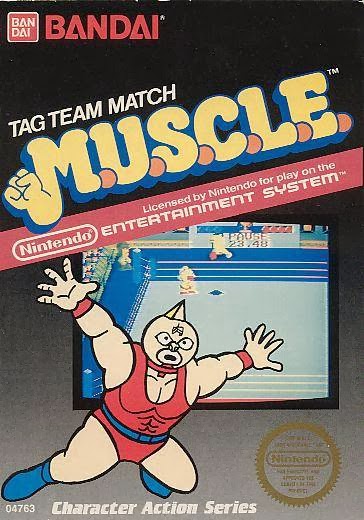 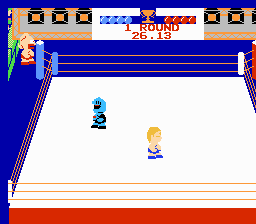 Methinks this match is a little unfair.

M.U.S.C.L.E. stands for Most Unusually Small Creatures Lurking Everywhere. It isn’t the most apt description for a wrestling game starring the masked, uh, things from “Ultimate Muscle” but it does make me chuckle to myself. While the character designs are great (Ramen Man! Meat!), the gameplay is little more than button-mashing the same moves into oblivion. ‘B’ is jump, ‘A’ is punch, and, as expected, there are a very small amount of moves you can do by combining those two buttons. Your energy bar goes down slowly of its own volition, but if you get hit, it obviously goes down faster. If you hit the opposing wrestler, you regain some health, and the sweaty dance continues. Every ten or fifteen seconds, a glowing orb comes into the ring. Getting the orb will be the key to your success in any match. Your body begins to glow and you unlock a special move that will dominate the other character. It’s cheap, yes, but incredibly satisfying when you get it. If you don’t get the orb, though, watch out. The computer will wreck shop/clean house/mop the floor with your Most Unusually Small Creature body. The wrestling is fun for a time, especially with two players, but don’t come here looking for depth. MUSCLE is all flash, no substance.
C+
The following two tabs change content below.