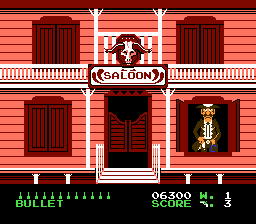 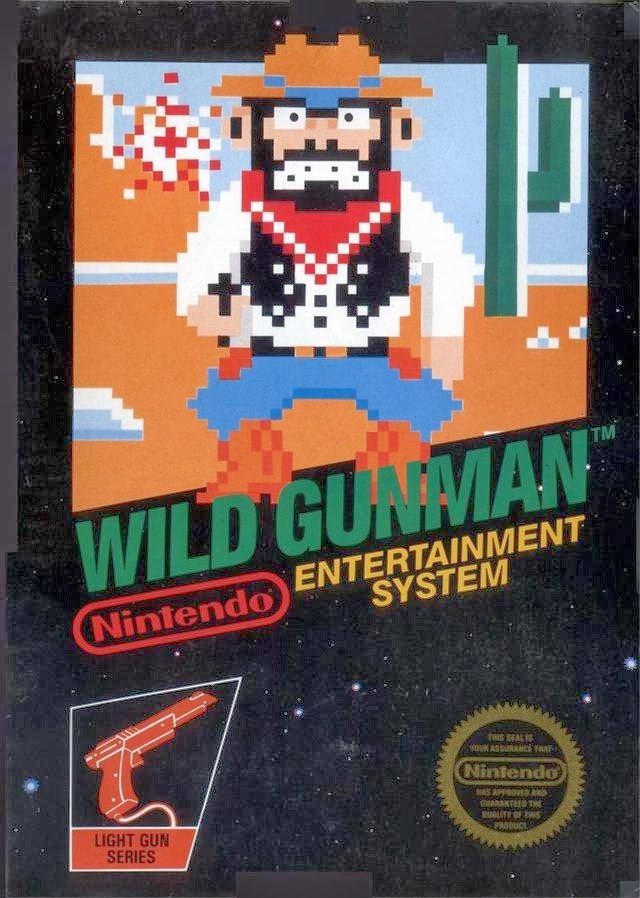 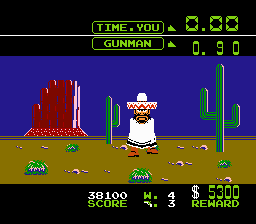 Wonder what’s under that blanket…

One of the original eighteen NES launch games and prominently featured in “Back to the Future Part II” as a point of ridicule, Wild Gunman is an antiquated shooting gallery set in the Old West. Three options present themselves on the main screen: One Outlaw, Two Outlaws, or Gang. Pick the Outlaw options and you’ll duel with stereotypical banditos. They’ll slowly walk across the desert background and stare at you briefly before yelling “Fire!” Once you see their eyes flash (making them look like demonic cowboys), pull the Zapper trigger and down they’ll go. The quicker you shoot them, the more points you’ll rack up. At the top of the screen, a timer will show how many seconds you have to shoot the gunman before they kill you; the rounds usually range from .4 to 1.6 seconds. The dueling rounds are unlimited and will continue for as long as your trigger finger/mind can stand it. The Gang option is the most enjoyable. You’re placed outside a saloon that has a door and four windows. Gunmen emerge from the door or any of the windows at any time, so shoot them as they appear. You have a limited number of bullets to use, and unlike in the Outlaw rounds, you don’t know how many seconds you have before the gunmen shoot at you. Like the other Zapper launch games (Duck Hunt and Hogan’s Alley) Wild Gunmen is quick arcade entertainment designed to show off the gun’s features. You won’t find depth here, but as a brief pick-up-and-play, it does the trick.
B-
The following two tabs change content below.