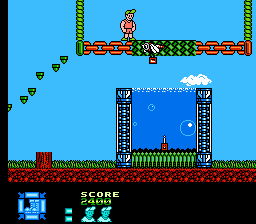 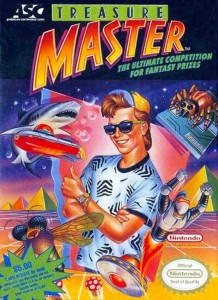 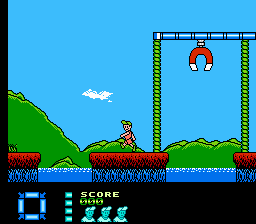 Boy’s got quite the pep in his step.

If Treasure Master is remembered at all, it’s less for its in-game “treasures” and more for its bizarre MTV-sponsored contest. The contest involved filling out and returning a registration card to American Softworks, obtaining a secret password by watching MTV between 12 and 1 pm on April 11, 1992, inputting said password into Treasure Master, beating the entire game including the secret world known as “Prize World,” and finally, calling an 85 cents-a-minute hotline to tell an operator (who was only available from noon to midnight on April 11, 1992) your game registration number and the serial number that appears after you’ve beaten Prize World. Seems a little convoluted for my blood. Why couldn’t kids just send in a picture of them beating the game to enter? I suppose the potential grand prizes sorta, kinda make up for any confusion: Free rock concert with hotel, flight, and $5,000 spending money; or free sports event with all of the aforementioned; or a fully-decked out gaming room, complete with big TV, sound system, Super NES, and 12 games; or $10,000 cash. Crazy prizes just for beating a Nintendo game, no? The 90s were a different age.
Treasure Master was released in December 1991, which means you had four months to master the game before the contest began in April 1992. But even if you mastered it, you wouldn’t be able to play “Prize World” until you obtained the password on April 11. You’d have to beat all six worlds, write down the code, call the 900 number, then hope an operator picked up immediately after you dialed. Otherwise, you’re shelling out 85 cents-a-minute to wait on the phone just to enter into a contest; a contest where, chances are, you won’t win anything other than a certificate saying “Good Job!” The 90s were a different age.
But what if you just want to play Treasure Master? Not for financial gain, but for “the love of the game,” as it were? Breakdown: you play as Scooter, a typical 90s kid who likes skateboarding, video games, and backwards caps (probably pogs too). He’s compelled to search through fantasy worlds in order to find treasure and become the Treasure Master. If you’ve played any adventure games, particularly in the Dizzy series, you know what to expect. Scooter has no attacks (except through items he finds, like a ray gun or stompin’ boots) and collects items scattered throughout the stage, in order to use them at other places around the stage. Find a bomb? Use it on a rope to access a hidden item/treasure. Do it quickly, though. Once you pick up the bomb, the fuse is lit and it will explode in your pants, whether or not you place it in the right area. It’s trial-and-error adventuring coupled with light puzzle elements. It’s not as colorful or engaging as Dizzy the Adventurer, but it’s slightly more fantastic then the Fantastic Adventures of Dizzy
I’m not sure whether Treasure Master was designed from the beginning as a joint venture with MTV, or if it just turned into that somewhere along the way to spark interest in the game. It’s a serviceable adventure title, but if you had purchased this in ’91 or ’92, the contest would have overshadowed the game itself (much like it did in this review). Also, just look at the half-baked main character and tell me he wasn’t thought up in a marketing meeting. One could say that about a number of characters in Nintendo games, but not every Nintendo game partnered with MTV to bring in sales. The 90s were a different age.
C
The following two tabs change content below.