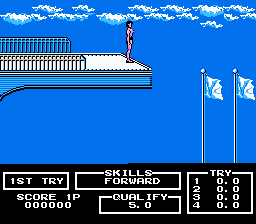 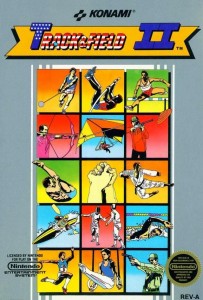 Am I the worst Track & Field II player of all time, or is this game as tough as qualifying for the Olympics? Gone are the cartoonish sprites, pick-up-and-play events, and effortless charm from the first game. In their place are life-sized human renderings, imperfect control schematics, and inflated egotism. Training mode enables you to learn the fifteen mostly new events, while Olympic Mode throws you right into the fray. Forget your Olympic aspirations, and immerse yourself in practice. Some events, like Pole Vaulting and Hurdles, are similar to events from the first game, and as such, are easy to conquer. Others, like Hammer Throw and High Dive, make you perform difficult control patterns in order to qualify. Hammer Throw is particularly brutal: rotating the D-pad counter-clockwise numerous times in a row is like sentencing your thumbs to lifetime arthritis. Tae-kwon-do has the type of janky controls one would expect from any sort of fighting game pre-Street Fighter II (‘Up’ to jump?! No, Konami, that’s not how it’s done). Archery now asks you to be much more accurate – adjusting the curve of your arrow is simulator material – and as a result, is a lot less enjoyable. Other events – fencing, freestyle swimming, canoeing (?!) – have their enjoyable moments, but the chaff far outweighs the wheat here. I’m sure Track & Field II has its defenders (doesn’t every game?) who applaud the title’s steep learning curve, but the loss of simplicity here is the reason Track & Field III doesn’t exist.
C
The following two tabs change content below.