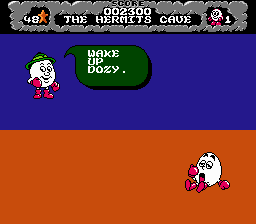 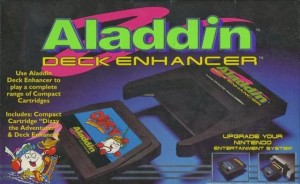 Apparently, Dizzy came with this deck enhancer. This appears to be a 32X-like enhancement for the NES. It was definitely unlicensed, I’m sure. How come I’ve never heard of this??? 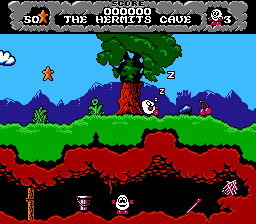 I know this screenshot looks like everything that’s wrong with the world, but trust me, the game is simple fun!

I’m not sure I’ve ever disliked the main character of a game, but still liked the game itself. Dizzy the Adventurer breaks new ground for me, then. I can not stand the main character, Dizzy the Egg. It’s not the fact that he’s an egg that bothers me, but he’s a snooty, pretentious egg who thinks he can solve everyone’s problems. A jester needs something to juggle? “Don’t worry, I’m on it!” he says. A lion has something in his paw? “Leave it to me!” You’re an egg wearing an Indiana Jones fedora! Get over yourself! To add insult to injury, he also puts down his friends. In one part of the game, Dizzy berates one of his egg friends, Denzil (??) for using the words “awesome” and “most excellent.” “Uh yeah, whatever Denzil,” are his exact words, I believe. What kind of hero is this? A self-involved, narcissistic egg with delusions of grandeur and a messiah complex? Codemasters, you crazy!
Dizzy has a decent game to back up his mental problems, though. The goal is to save his girlfriend Daisy from an evil wizard who has her trapped in his castle. Dizzy must collect items he finds around him and use them at the appropriate place. Found a pickaxe? Go destroy that boulder blocking the entrance to the cave. Found a gold doubloon? Give it to the ferryman after your cross the river; otherwise, he won’t let you pass. The title of the game is accurate: Dizzy is an “adventurer,” not an action hero; even if you wanted to punch creatures, you have no attack. In order to progress, you must pay attention to your surroundings. It’s not always apparent what you do with certain items (like the mushroom in the beginning), but be patient and the items’ use will reveal itself eventually.
The only real issue I have with Dizzy is his ability to roll all over the place. I understand he’s an egg, but sometimes when you jump, you begin to roll and roll and roll immediately when you land. This becomes detrimental when you have to jump onto a moving platform over water, and the water can kill you instantly. Other than that, Dizzy the Adventurer is one solid adventure game, and a solid respite from the past couple days of crap. If you can get around the fact that you’re controlling a selfish egg*, there’s much to enjoy.
B 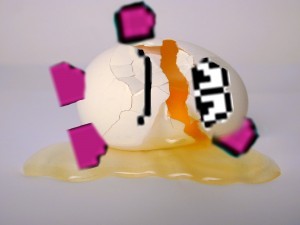 *I would have loved to see some gruesome Dizzy death scenes. What if I fell off of a high cliff and landed on a boulder? BAM! “Dizzy’s insides have been laid to waste due to your carelessness,” the game would have said. The last image you would see is Dizzy split in half, his yolk running down onto the boulder, and birds eating his insides. That would be incredibly satisfying.
The following two tabs change content below.