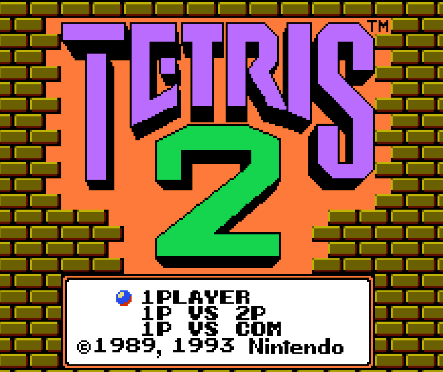 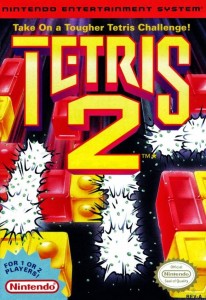 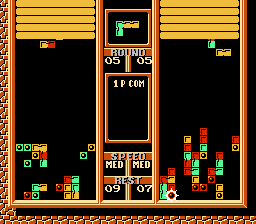 Even the COM isn’t doing that well.

The original Tetris for the NES is a complete work, perfect inasmuch as any game can be perfect. So why Tetris 2? Perhaps a Tetris sequel isn’t a terrible idea (God knows there have been enough of them over the years), but if one were to exist, it should expand upon the original’s gameplay or take it in a bold (but logical) new direction. Tetris 2 instead borrows liberally from Nintendo’s own Dr. Mario, retaining none of the addictive properties of the original.
Many cool kids over the years have considered Tetris to be “da bomb” (particularly in the late 90s, when said phrase was mildly relevant), but Tetris 2 is actually all about bombs. Red, yellow, and blue bombs litter each level. Each falling Tetris piece – whether the L-shaped, zig-zag, or the new what-the-hell-kinda-shape-is-this variants – is composed of red, yellow, and blue bricks. Get two bricks of similar colors on top of the bomb and it disappears, like Russian witchcraft (three bricks of like colors will also disappear). Rid the level of the bombs and you progress onward. It’s Dr. Mario with Tetris pieces instead of pills, and bombs instead of viruses. Trouble is, the Tetris pieces are longer and more awkward to maneuver around the playing field, than squatty pills. Even in the beginning levels, the bombs are placed close together for maximum irritation. The more multicolored Tetris pieces build upon the bombs, the less likely you’ll be able to whittle them away, and a loser will be you. A two-player versus mode includes a friend in the frustration, and the VS. Computer mode won’t scratch anyone’s itch. “Da bomb” has been defused.
Washed-out graphics, forgettable new tunes, and loose controls could be forgiven, if Tetris 2 actually played like Tetris. Heck, Tetris on the Game Boy looked like crap, but it helped the console sell thirty million units. No, Tetris 2 is a bastardized Dr. Mario with Tetris pieces, created to make a quick buck before the NES headed to the Great Console Graveyard. Shame on you, Nintendo.
D-
The following two tabs change content below.