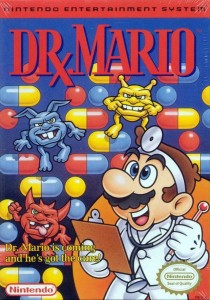 The cure for what? Ugly buck-toothed, shrimp-eating, multi-colored gnomes?

Is that supposed to be Ridley in that mess of germs?

Is Dr. Mario a puzzle game, as we think of puzzle games today? Think about that question, but first, a memory. I rented Dr. Mario when I was five or six because, well, Mario was on the cover. And he was wearing a doctor’s coat! When did he have time to get his Ph.D in between Super Mario Bros 1, 2, and 3? The guy’s a dynamo! Anyway, Tetris had been out for a year or so, and everyone and their moms (literally) had already played it and played it and played it. Playing Dr. Mario, my five-to-six-year-old mind comprehended that, because there were objects falling from the sky a la Tetris, then Dr. Mario must be a puzzle game because Tetris was my only frame of reference as to what a puzzle game was. In Tetris, one must handle the differently-shaped blocks that fall from the sky. Re-arrange them so that they disappear, and after every tenth line, you will progress to a new level and the blocks will drop more quickly. Dr. Mario’s main screen is set up similarly to Tetris, but instead of blocks, you must utilize red, blue, and yellow pills (or a combination thereof) to eliminate the similarly colored viruses on screen. Once you eliminate them all, each passing level contains more viruses for you to deal with. The “puzzle” element comes in recognizing what colored pill needs to go over what virus as quickly as possible. You have to have insane reflexes and scan the screen quickly, before Mario – ahem, excuse me – Dr. Mario starts hucking pills like a madman, if you hope to progress beyond the first few levels. It’s difficult, sure, but is it a puzzle game? Consider all the puzzle games you know. Most of them require a combination of strategy, quick thinking, and sometimes, fast reflexes. In Dr. Mario, you only need fast reflexes. Quick thinking and strategy do not play into the game. I’m open to debate, and in fact, would love some. Leave a comment!
I wish Dr. Mario were more interesting, but I can’t seem to love the little guy. The game entranced me when I was a kid, but recent play sessions have left me cold. Head-to-head is still fun, especially on later versions. The good doctor will always live on in my nostalgic dreams, but in 2011, he’s just an average Joe.
C
The following two tabs change content below.