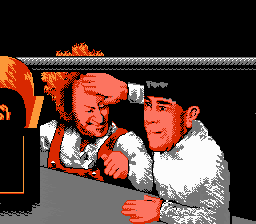 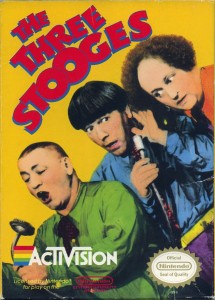 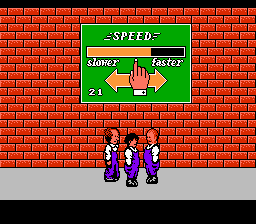 “Mutton for brains, the both of ya!”

The Three Stooges is a basket of strange nyuks: a handful of minigames/events starring the Stooges that limits their antics, while staying true to the spirit of their films. In the game, Larry, Curly, and Moe are trying to raise five thousand dollars in thirty days to save an orphanage. Every day you look at the “Stoogeville Job Market” a.k.a. a rectangular bar of pictures at the top of the screen, and select a minigame using a hand that’s constantly moving around the bar. There are four main minigames based on the Stooges’ shorts: a cracker-eating contest (eat the crackers before the oysters do, ya chowderhead!), a pie-throwing contest (slam wealthy dowagers faces with pie), a red-cross collecting venture (move through the hospital collecting crosses and avoiding the enfeebled), and a “boxing” match (whereby you grab a radio playing ‘Pop Goes the Weasel,’ race it back to Curly, and don’t actually box anyone). Other events include Three Stooges trivia questions, random money piles, mousetraps. The latter is the only way to actually lose a life. After four fingers/lives have been lost, it’s game over, the bank owns the orphanage, and there’ll be no “Whoop-whoop-whoop”s for anybody.
There’s only one event in Three Stooges where you play as Moe and hit the Stooges. The more you hit the Stooges successfully, the slower the minigame-selecting hand will go. That’s your only reward for a slap well done, and the only time where the game allows the Stooges to engage in the behavior many remember them for. Despite the appalling lack of violence, The Three Stooges does a fine job with its minigame structure (thank God it wasn’t another horrendous Beam Software platformer). It’s short and somewhat lacking in content, but then, so are the Stooges films. Know what you’re getting into with these knuckleheads and you’ll soitenly enjoy it.
B-
The following two tabs change content below.