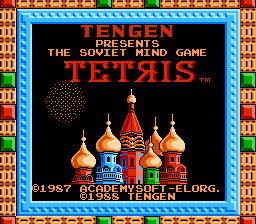 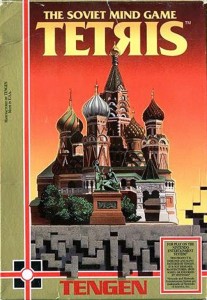 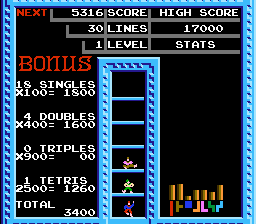 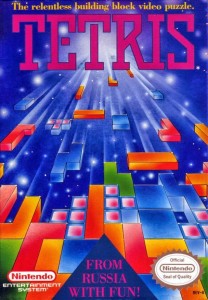 “From Russia With Fun”? C’mon, Nintendo… 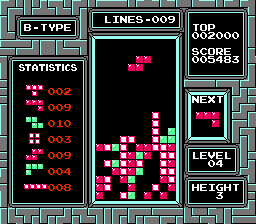 Nintendo’s version has more vibrant colors for the Tetris pieces.

Tengen’s Tetris is a full-bodied salute to Mother Russia. From the Cossack dancers that greet you every time you beat a level, to the traditional Russian folk tunes, to the overwhelming sprite portrait of an Orthodox cathedral (complete with fireworks!) when you boot up the game. Since Tetris was first developed by Alexey Pajitnov, a Russian, said salute honors the man’s homeland (previous versions did not overtly emphasize Tetris’ Russian origins). Nintendo’s Tetris retains some of the Russian imagery, but the cathedral sprites and folk tunes, though well-composed, feel obligatory rather than celebratory. This could have to do with Nintendo’s policy of shying away from controversial imagery, and the fact that the Soviet Union had yet to fall when their version was released. Nevertheless, despite being unlicensed, Tengen’s Tetris radiates warmth and personality compared to Nintendo’s well-developed, but ultimately sterile interpretation.
Even if you could care less about Tengen honoring the Motherland more than Nintendo, Tetris with the backwards ‘R’ is the deeper, better version. Check these modes: One-player (natch), Two-player VS (!), Two-player co-op (!!), Computer VS. and, perhaps the craziest mode of all, Computer co-op. That’s five modes, without counting the handicap option that scrunches the playing field by adding layers of misshapen bricks. Nintendo only has two modes – A-Type or standard one-player Tetris and B-Type, a backwards version that has you clearing a certain number of lines in order to win. Both versions play the same – Tetris is Tetris is Tetris – though Tengen’s version felt more responsive. It does feel more rewarding to clear lines in Nintendo’s version, though, particularly when you get a ‘Tetris’ and the screen sparkles.
Thanks to legal troubles with Nintendo (Nintendo owned console rights to Tetris, while Atari/Tengen owned arcade rights), Tengen’s Tetris was pulled off the shelves mere weeks after being released in 1989. Later that year, Nintendo’s version appeared on the shelves, cementing it as the one-and-only Tetris authority on the NES. Tengen’s version was largely forgotten, until the mid-to-late 90s ROM explosion made it more obtainable. Since then, it has grown in esteem and value. The going rate for it on Pricecharting.com is $45 – a goodly sum for an NES game, though not as rare as other games. And if you’re a Tetris fan, it’s absolutely worth it. Nintendo’s version of Tetris is playable, enjoyable even. But once you’ve dabbled in the forbidden fruit that is Tengen’s Tetris, there’s no going back to a lesser version.
TENGEN: A-
NINTENDO: B+
The following two tabs change content below.