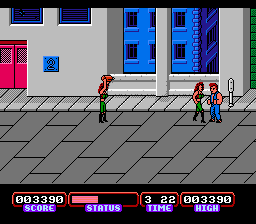 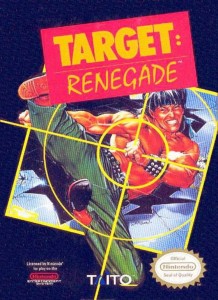 The bullet’s already in his fist. 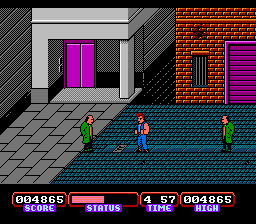 I don’t have any change, but I can spare ya a fist.

Renegade was a by-the-numbers brawler that, nevertheless, gave the player a valuable message: don’t go into the subway after 2 am. Target: Renegade, the unofficial sequel to Renegade, takes away the original’s public service announcement, while retaining the mediocre throw-downs. The game is your standard walk a few feet, beat up a handful of thugs who all look the same, repeat until end boss. Punching, kicking, and jump-kicking are your three methods of street-cleaning. Punching and kicking connect well enough, but jump-kicking feels clunky and erratic; unfortunate, ’cause it’d be a great move to spam. Enemies come at you from both ends, and usually take more than a few hits. In Renegade, you could beat up foes on the left and the right (albeit haphazardly) at the same time, but here you’re not even given the option; don’t get trapped between two thugs, the end. You have an ample life bar, but only one life. A lone continue will pop up after completing certain stages, but it still behooves you not to get hurt (even though you will because the thug stereotypes are buttholes). Stages and character models are poorly designed, the control sticks occasionally (squatting to pick up hearts is the worst), and the music doesn’t provide necessary momentum. Target: Renegade is right on target – to suck. The burn ward will be open momentarily.
D+
The following two tabs change content below.