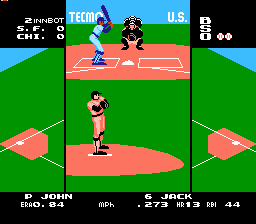 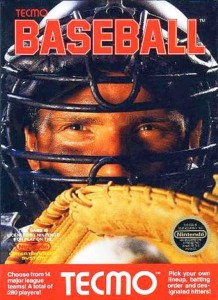 Tecmo Bowl is considered by many retro gamers to be the best football game on the NES, so it’s not surprising that some of Tecmo’s other sports titles have been lost to the annals of time. Tecmo produced Tecmo Cup Soccer Game, Tecmo NBA Basketball, Tecmo World Wrestling, and today’s nugget, Tecmo Baseball. As 8-bit baseball goes – and Lord knows, I’ve played my share – it holds its own. Batting and pitching feel tight, character models aren’t terrifying to look at, and the outfielders actually do what they’re told. Though there are real American teams, don’t expect real players; licensing was a thing of the future, at the time of the game’s release. As someone who doesn’t particularly like sports sims, I appreciate that Tecmo Baseball doesn’t overwhelm you with stats and options. You pick your pitcher in the beginning, re-arrange your players to your liking, then you’re off to the field.
Couple niggling frustrations: if you have a player on base and the next batter hits the ball, but the hit ends up an out, both players will be out because the batter on base automatically runs to the next base. There should be an option to keep the player on base stable until the hit is sure to be a run. Also, it was incredibly hard to score a point – at least for me. I could get hits all day, but it wouldn’t be long before all my boys would be out thanks to their low-down, automatic running ways. Nevertheless, Tecmo Baseball succeeds in the fundamentals. As a man who’s dabbled in a sucky baseball game or five, I appreciate the effort.
B-
The following two tabs change content below.