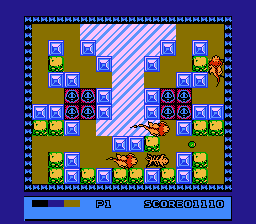 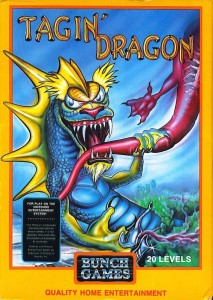 That pile of bones is my dragon carcass. They look a bit like lions, don’t they?

Sachen is one of the shiftiest unlicensed developers on the NES, but I’ll give them this: when they’re not outright stealing from other developers (Mission Cobra, Galactic Crusader), they’re making some of the most bizarre original games on the NES. “Original” doesn’t mean “good,” necessarily, but they should be awarded points for creativity, if nothing else.
Tagin’ Dragon for example, casts you as a dragon whose purpose is to bite off other dragon’s tails, then kill them. Not exactly a lighthearted dragon romp like “Pete’s Dragon” or the PBS train wreck “Dragon Tales,” but at least Sachen keeps the cannibalism blood-free. Each of the twenty levels are maze-like in structure. Sneak up behind the other dragons and bite their tails with ‘A.’ If a piece of their tail is missing and they bite a piece of your tail, theirs will grow back (likewise for you). Some dragons have longer tails than you, which gives them a superior advantage if you face them head-on. Face a dragon with a shorter tail head-on, however, and you will be the victor. The other dragons can move faster than you, but the AI is dumb so it’s not hard to outrun them unless they gang up on you.
Like most Sachen titles, Tagin’ Dragon has a dearth of content. There’s nothing to do outside of eating dragons and collecting the occasional bonus item. Everyone should try this freaky arcade disaster at least once, if only to say they’ve played a cannibalistic dragon game. Once is all you’ll need, though. No tag backs.
D
The following two tabs change content below.