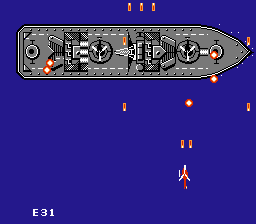 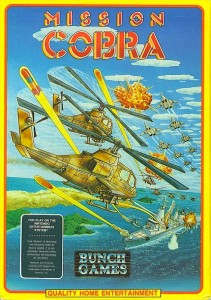 Two helicopters against a battalion of planes? Sure, I could see it. 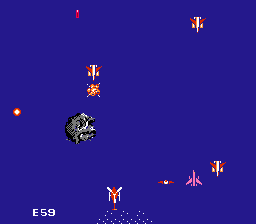 Mission Cobra wants you to shoot a bunch of planes for a few levels, and get out. After the third stage, the levels begin to repeat. You only have one life, so when you die, it’s game over. There’s no overarching goals, no saving the princess or a country or the world. Just lots of shooting. I respect that because I love shmups, and if we’re all being honest, shmups don’t need goals. They need tight controls, weapon upgrades, and big boss showdowns that take up the whole screen, while giving you a near heart-attack. Unfortunately, out of the three essential shmup components, Mission Cobra only has weapon upgrades, and most of them are sub-par (the bosses, while large, are derivative and unoriginal). The rest is lifted from the 1943playbook. The planes descend and ascend in your direction, just like in 1942 and 43. You have an energy meter that decreases slowly, just like in 1943. The only difference is that you fly a helicopter, not a plane. Being a helicopter seems to increase your maneuverability, but being able to move quickly won’t matter if your weapon is weak or can’t be fired rapidly. Strangely, many of the weapon upgrades actually fire much slower than your main original shooter, so depending on what the enemy drops, it might actually be better to keep your original weapon. I personally recommend the triple shot. It’s not the fastest, but it does a great deal of damage.

I don’t fault Mission Cobra and Sachen for stealing elements from Capcom’s beloved shooters, nor do I fault the game’s “keep-it-simple” ethos, but I do take issue with the laziness on display here. Why do the weapon upgrades largely suck? Why aren’t there more than three original stages? It’s like the developers could barely muster any effort to even code the game. A two-player component does make the game more interesting, so if you’re going to seek it out, take a friend. Just don’t be surprised if Mission Cobra makes no impression.