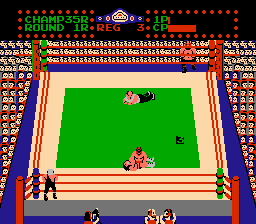 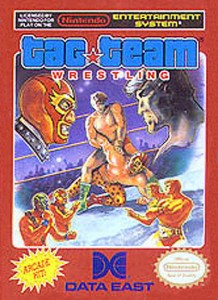 “Tag Team Wrestling is some archaic wrestling action, action, action!” but if it were up to me, I’d remove two of those uses of “action,” and question the wrestling. You play as Team Ricky Fighters (starring Ricky and Ultramachine, respectively) against Team Strong Bad (Worly and Mascross) for twenty-five mind-numbing matches. In order to do anything, hit ‘A’ to punch and grab your opponent. Once they’re in your grasp, cycle through a move list with ‘B.’ Find the move you want and use it within a 3-second time limit, or your opponent has the opportunity to reverse-attack.
Cycling through a move list during the middle of a wrestling match is as cumbersome as it sounds, particularly within the time limit. I recognize that this is an early NES game, and inputting a bunch of different moves onto the limited NES controller wouldn’t become vogue in brawlers/wrestlers for a couple more years, but that doesn’t make scrolling through moves any less of a nuisance. Tagging your partner in is a crapshoot. There were several times when I was caught in a hold and, despite calling for him with ‘A,’ he stood on the sidelines oblivious to his partner’s woe. Also, unfair computer advantage: a couple times throughout every match, the CPU will turn red and be able to get a clean hit on you, no matter what the circumstance. Don’t run from it because you can’t. Just accept it. That should be Tag Team Wrestling‘s motto: just accept it. Because no matter what kind of optimistic “I-love-wrestling-in-all-its-forms” mindset you throw on this game, it’s not getting any better.
D-
The following two tabs change content below.