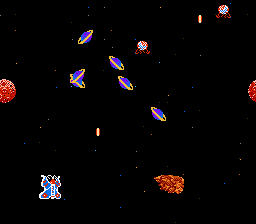 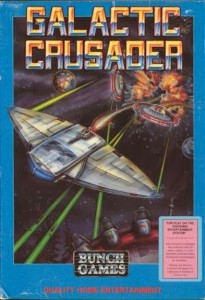 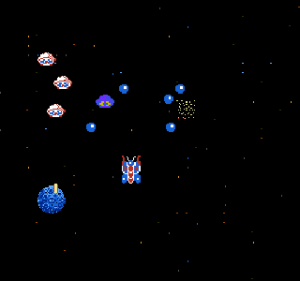 The colors really stand out, as does the feeling of being in space. None of that matters when you’re playing the game, though.

If the opening screen is to be believed, a witch has ensnared the galaxy and you, as a butterfly, are the only creature that can stop her. Oh Sachen, you crazy devils, what will you think of next? But seriously, Galactic Crusader is a vertical shmup, you do play as a butterfly that shoots pellets, but most importantly, it’s a Star Force clone. The latter could be a very good thing, but here it is a very, very, very not-so-good thing. I’ve been a champion of Sachen in the past, but this game has two debilitating flaws that prevent it from having what it takes to be a Sachampion: 1) the enemies don’t have any particular patterns. Clusters of them will move clockwise, counter-clockwise, squiggly, straight, and all of the above within the same cluster. This is important because in almost every shooter (in most games, one could argue), vertical or horizontal, enemies follow patterns. This allows you to learn the pattern and in theory, become better at the game over time. Galactic Crusader offers no such luxury. 2) it is better to avoid some enemies altogether, especially since there is no point structure. The reason for the latter is because, when some of the enemies explode, shrapnel shoots out of their body so fast that it’s impossible to move out of the way. This ends up weakening or killing you very quickly. It’s a shame because Galactic Crusader isn’t unplayable. It controls well, looks decent, in that homemade Sachen way, and the power-ups are good, if not worthless at times. Why waste time playing a half-hearted clone when you could play the real thing, though? Star Force awaits.
D
The following two tabs change content below.