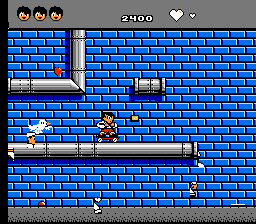 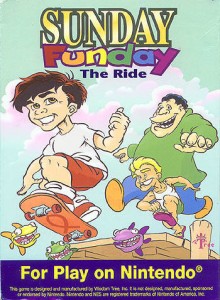 This was originally called Tuesday Poo-sday but the Wisdom Tree marketers wouldn’t stand for it.

Exploding plumbers isn’t something you typically deal with on the way to church, but he had it coming.

Sunday Funday takes Menace Beach and stuffs it with a dose of Vitamin Church. Instead of saving your scantily clad girlfriend from Demon Dan, you have to make it to Sunday School on time or else the teacher won’t start without you. For some reason, this compels you to get on your skateboard and beat your way to class. Every possible form of heathen is against you: bullies, plumbers, businessmen, and clowns, among other evil entities. The level design, control, and gameplay are exactly the same as Menace Beach. The large-headed skateboarding kid is as unwieldy to control as ever, and the levels are short and pointless. Slam your skateboard into the faces of all who oppose you, and call it a level. Wouldn’t it be awkward to roll up to Sunday School with a bloody skateboard? It throws the whole concept of “turning the other cheek” out the stained glass window. 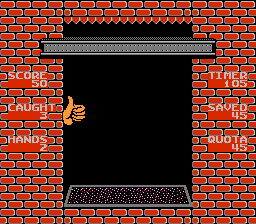 Thanks, Thing!
Rather than re-package the same game for the third time (Menace Beach was released separately and in an unlicensed multi-cart) without any new content, Wisdom Tree/Color Dreams decided to include two strange additions. The first is a mildly amusing mini-game called “Fish Fall.” Here, a conveyor belt drops fish onto a platform with a disembodied hand. Grab the fish with the hand and throw them back up into a bucket that is slowly traveling alongside the conveyor belt. It’s entertaining for a couple levels, but wears out its welcome quickly. The second addition is “4Him: The Ride,” a Christian karaoke song from the band 4Him. Yes, one song – “The Ride” – and one song only. How does karaoke work on the NES, you ask? Essentially, “The Ride” is run through an 8-bit Machine, and spit out the other end with poorly constructed sound and no vocals. But hey! The lyrics are there if you need to belt your heart out. 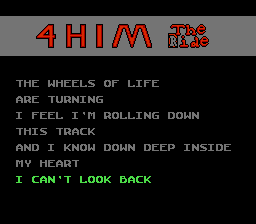 Sunday Funday isn’t a bad game. Menace Beach is. Sunday Funday is, like Danny DeVito in “Twins,” the clone that didn’t ask to be born and, in all likelihood, hates itself. It’s composed completely of discarded scraps of gaming DNA, then injected with an even crappier plot than its older brother. Also, Sunday Funday was released in 1995, one year after the last licensed NES game, and one year prior to the release of the Nintendo 64. Who could want it? Who could love it? Who the hell even knew about it? Blame Wisdom Tree a thousand times over for Sunday Funday‘s existence, but leave the game itself out of your scorn. It’s suffered enough.