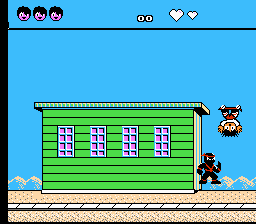 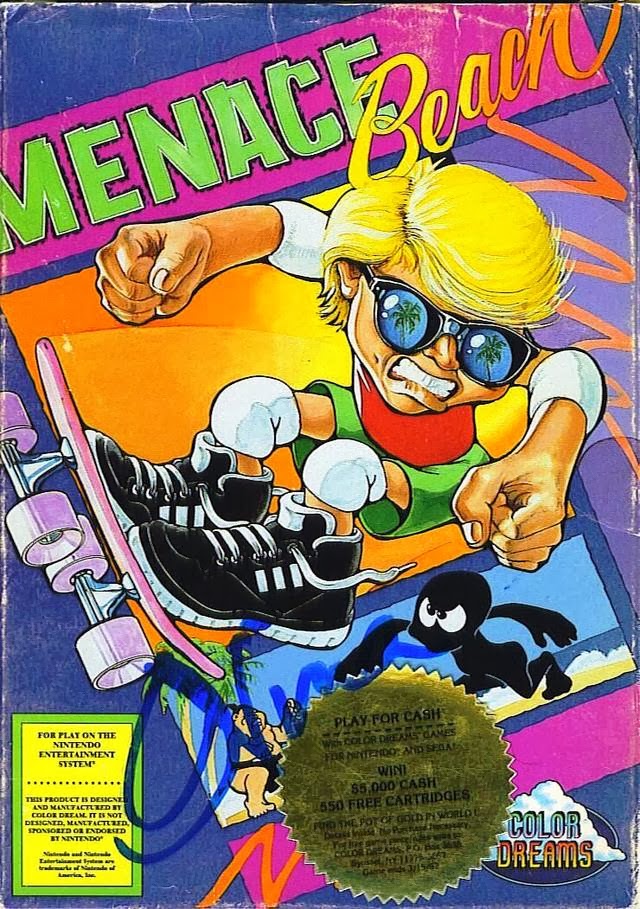 That kid is so punk with his huge sunglasses, pink skateboard, and combed blond hair. 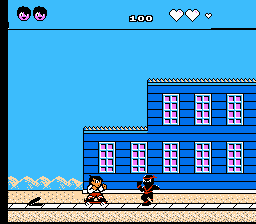 I’ve always wondered about those pesky ninjas by the beach. Most ungentleman-like.

Menace Beach was awful enough when it had fourteen other games to hide behind, but now that the spotlight is completely upon it, let us all be like Ma Barker and run for the hills. The premise, such as it is: a fun-loving “dude brah” skateboarder (named Scooter?!) has to get his complaining Veronica of a girlfriend back from “Demon Dan;” the manual says that Demon Dan is an actual demon, but he sounds like an evil biker with a silly name. The controls for skating around are too slick and greasy, which is a shame, because skating is all you do. You skate to progress forward, you skate to attack, and you skate under items to pick them up. Besides the occasional ninja, Elvis impersonator, or sumo that you have to attack to progress, the levels are barren. Random hands will pop up out of sewers or windows to toss you items, but the backgrounds are bland, lifeless renderings of boardwalks and factories. The game looks bad, sounds worse, and promotes creepy voyeurism a la the continuous undressing of your girlfriend at the beginning of every stage. My main point of contention with Menace Beach, though, is that there would be no challenge if it weren’t for the broken controls. If Scooter controlled responsibly and not like a drunken carouser, this game would be beatable in five minutes and it would highlight the lack of anything actually occurring in the levels. Menace Beach thrives on brokenness. Don’t indulge it.
F
The following two tabs change content below.