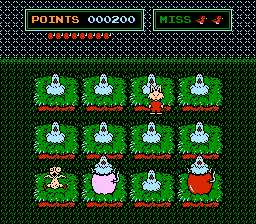 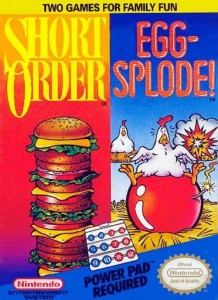 The beef and the buns look exactly the same. “Short Order,” my eye. 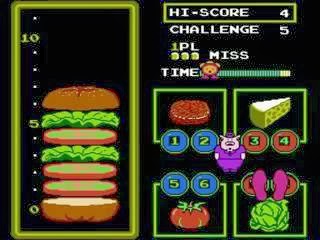 It’ll take you a half hour and a couple heart attacks to build a burger with the pig’s specifications.*

As a Power Pad title, Short Order/Eggs-plode! is a refreshing change of pace from the overabundant track-and-field games typically bundled with the peripheral. In Short Order, you work at a restaurant and use the Pad to build a hamburger with all the fixins. Buttons 1-8 are assigned to fixins, with two Pad buttons per fixin’ (for example, 1-2 are meat, 5-6 are tomatoes, etc). Select a burger size (they range from ten stories high to ninety-nine), then jump on the Pad to add ingredients in the order the game gives you. Imagine “Memory” crossed with Burgertime, but without the risk of being devoured by carnivorous hot dogs. Simple enough for honest folk.
In Eggs-plode!, foxes are planting bombs in the nests of chickens. Step on the Power Pad in the appropriate position to stop the bomb from going off. Don’t step on a chicken’s egg or you’ll feel the wrath of a thousand ba-gawks. Step on an egg twice and the game is over. Without question, Eggs-plode! is the more addictive of the two. Each round adds more foxes with bombs that explode faster, and it’s all you can do to waltz around the Power Pad diffusing them all. My tip is to keep one foot on the lower-left or lower-right edge of the Pad, then use your other foot to take the bombs out. You need to be of moderate height to accomplish this, though. If you’re on the shorter end, I love you, but you’ll probably need to diffuse bombs the old-fashioned way: with both of your feet. While not a deep title by any means, Short Order/Eggs-plode! is a quick, enjoyable arcade experience that justifies the Power Pad’s existence more than Street Cop ever could.
B
*thanks to GameFAQs.com for the image!
The following two tabs change content below.