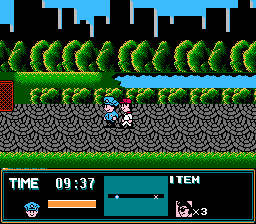 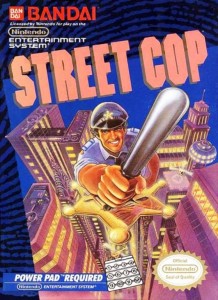 I’ll be takin’ that soul of yours now. Nice and easy.

Copping a feel on an officer is an arrestable offense.

Street…? Cop…? Street Cop. In this Power Pad/controller collaboration (1989 y’all!), you guide a budding young officer down every rough street imaginable. Swing your baton with reckless abandon. Pick up soda cans to throw at no-goodniks, and use a dog whistle to call for canine backup. There are six perp-smashing levels, one of which is Harlem (no social commentary on my end, just sayin’). How does it control? As awkward as one might think. You can use the Power Pad exclusively to control the cop’s every movement – running, changing directions, beating people, throwing apple cores – or use the controller to attack and the Power Pad to walk. The former is do-able but still difficult, while the latter is confusing. It’s best to use the Pad by itself, though the question “Why can’t I play this with a standard controller?” will never leave your mind. Graphically, Street Cop has a washed-out, childish look – not an image you want a “tough brawler” to put forth. The cop looks like he’s fresh out the third grade. None of the game’s criminals – Snatcher Joe, Bloody Betty, any of the purse-snatchin’ nobodies – are scared of this potential bed wetter. Shady child labor laws notwithstanding, I applaud Bandai for experimenting with the controls of the traditional brawler, but there’s no reason the game should have to use the Power Pad to work. As I originally assumed when I turned it on, Street Cop is a clumsy tech demo disguised as an action title.