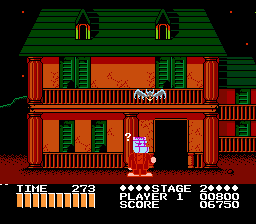 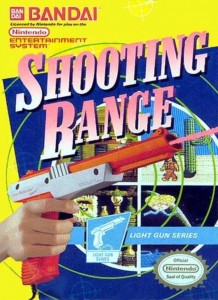 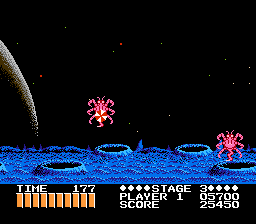 Today’s outdoor “shooting range” implies real guns, earplugs, and precious antique cans. According to Bandai, a Shooting Range is a three-level Zapper tech demo that spans from the Wild West to Transylvania to the deep black of Space. In each level, targets are attached to moving people/creatures. Scroll through each two-screened level, and shoot as many targets as possible. If you miss, your Energy bar decreases, as does your inflated sense of self-esteem. Sometimes the targets will leave icons to power-up your energy, increase your time limit, or give you more points. Shoot those too because if you don’t, they’ll disappear. After you beat the three levels (plus one nutso bottle-breaking bonus stage), you can play them again on a harder difficulty or play Party Mode. In Party Mode, you shoot targets that rise out of holes a la Whack-A-Mole for 400 seconds; it is not quite the party that its name suggests. Three other players can shoot with you on the Shooting Range, but it’s one person at a time; no cuts, even if you brought your own Zapper. Can you imagine four Zappers on a NES Fourscore, each person shooting in vain at the screen? That’s almost as ludicrous as four Game Boy Advances plugged into a Gamecube! Shooting Range is about as dry and worthless as games get on the NES. You’d be better off shooting real bullets into an old Campbell’s Soup receptacle.
D
The following two tabs change content below.