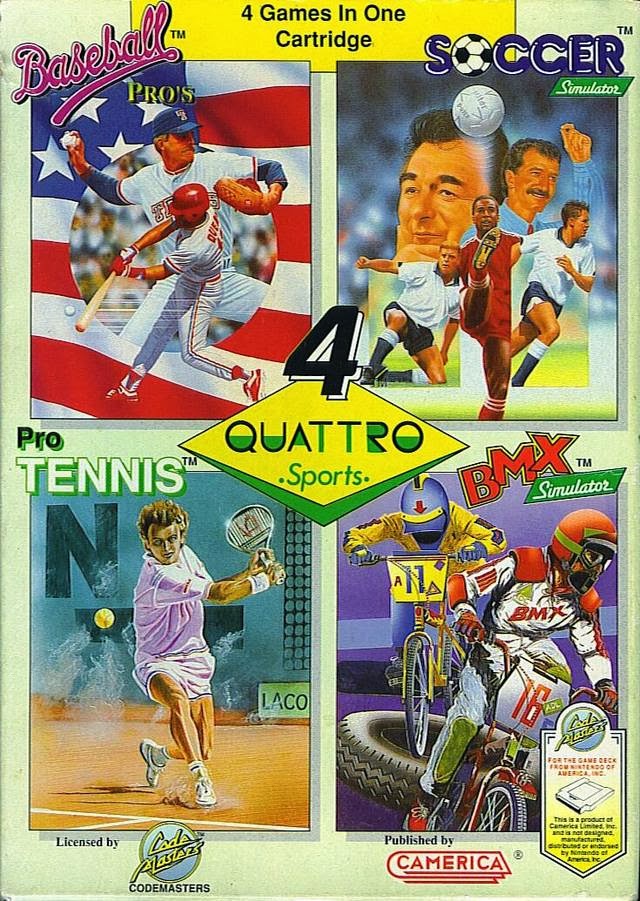 I’m not a sports fan, so having to play four sports games back-to-back is the equivalent of snuggling with Pinhead for me. The games contained in Quattro Sports range from bland to terrible, in that order. Codemasters really wants to be viewed as a jack-of-all-trades developer, able to leap genres in a series of multi-cartridges. But why bother making half-hearted crap just to show that you can?
Baseball Pros 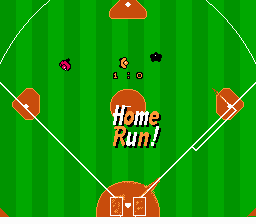 If there’s one feature Baseball Pros provides to the player, it’s choice. Check out these fake teams with great names: Moscow Bears, New York Knockouts, Hawaiian Volcanoes, Peking Dragons, and my personal cringe-worthy favorite, Mexico City Sombreros. There’s more too, but these are all you need, really. I picked the Moscow Bears and, offensively, I rocked hit after hit. Defensively, my Bears needed a trap or two to get their behinds moving; slow bumbling oafs, they were. These Baseball Pros aren’t Baseball Stars, but they get the job done.
C+
BMX Simulator 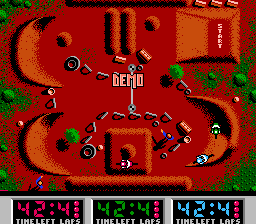 Demo?! Lies and slander!
Put on your helmet. Brush the dirt off your shoulder. Get your swagger back. Go! Straddle those turns! Make a pass at a girl in a car! Accelerate, brake, don’t choke!!!…
Don’t you hate BMX accidents? Those handle-grippin’ extreme bike jockeys are always wrecking their rides, and now, thanks to BMX Simulator, you can know how it feels. If you’ve ever super off-roaded before, expect the same miniature races here. Be sure to pick Jarissa too. She’s constantly harassed for her unusual name, but she’s a BMX superstar.
C+
Soccer Simulator

Go Holland! You’re number one, probably!
Yup, Soccer Simulator simulates soccer alright. The creativity lacking in the title should clue you in to the amount of effort put into the game. It’s rudimentary, bare-bones soccer with no stats or features to speak of; “simulator,” my eye. Then again, if any of that stat crap was featured here, I’d be annoyed too. Did I mention I don’t care for sports game? Yeah, Soccer Simulator hasn’t changed that.
D
Pro Tennis 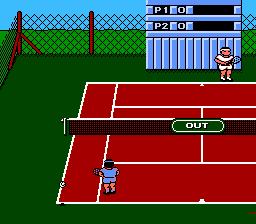 No, you’re at fault, Pro Tennis!
If the artisans at Codemasters are to be believed, the sport of tennis is the most difficult to recreate virtually. Why can’t I serve the ball without a fault? If I serve the ball too high, it goes too far. If I serve too low, it hits the net. I tried finding the imaginary sweet spot in the middle and I flubbed completely. Once the computer began serving the ball to me, I couldn’t hit it in the court to save my life. At this rate, I wouldn’t even be able to make it as a ball boy. And I don’t care.
F
The following two tabs change content below.