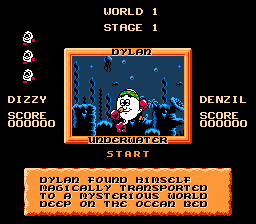 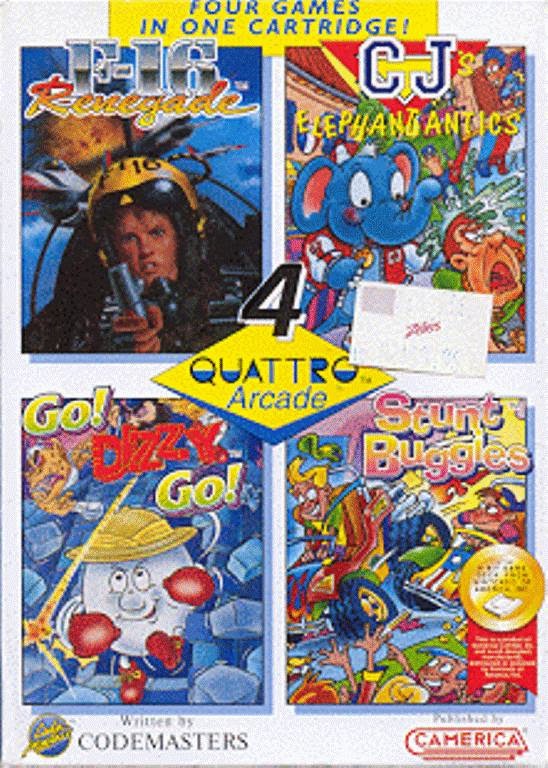 Quattro-mania swept the nation in the early ’90s. Codemasters was there to take a piece of the pie.

Quattro Arcade is another unlicensed four-in-one game cartridge brought to you by Codemasters. Thankfully, it’s leagues better than its hit-and-miss predecessor, Quattro Adventure. Here’s a thought, though: why not devote development resources to one great game instead of four decent ones? Wouldn’t that be easier and less stress-inducing for all concerned?
C.J.’s Elephant Antics 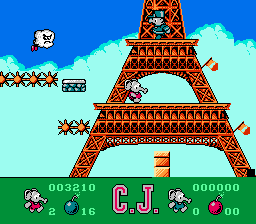 Police elephants in Paris?
Elephants can do a lot more than trudge through Africa and spray water on themselves, you know! Case in point: C.J. the Elephant has some antics he’d like to perform for you. Said antics involve avoiding French police guards, skiddily bopping through the Arctic, sweatin’ to the oldies in Egypt, and trying to stay alive in the Jungle. These platforming shenanigans aren’t anything new, but at least Cornelius Joseph. Elephant isn’t slow and lumbering. His nose can spray what I’m assuming is water onto enemies, and he also wields bombs that, once unleashed, roam of their own accord. Levels are fairly well-designed and the mood is whimsical throughout. Good show, C.J.!
B-
Stunt Buggies 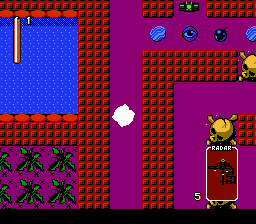 The Eye of Buggie will see quickly to your demise.
It’s a buggie-eat-buggie world in Stunt Buggies. There are sixteen carefully crafted levels, perfectly designed for buggies to destroy each other. And destroy they will. Throughout each level, there are between three and five buggies that want to stop your bomb-collecting (what’s with all the bombs, Codemasters?). Collect all the bombs, then return to the portal from whence you came. It’s simple , easy, and fun for about five minutes. Warning: actual stunts may not exist.
C+
F-16 Renegade 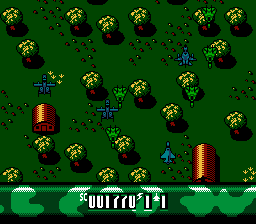 Perhaps a color outside of blue or green would help distinguish the planes.
I enjoy shmups, even crappy ones like F-16 Renegade. The game is a complete ripoff of Capcom’s far-superior 19XX series (1942, 43, etc). It has floaty controls, drab graphics, slow progression, and the enemies’ bullets (more like pellets) are barely visible. But so help me, I still enjoyed myself. It’s cathartic to mow down enemy fighters with waves of bullets. The resulting explosions are just as nourishing, if not slightly more dangerous.
B-
Go! Dizzy Go!

This is totally me. In egg form, of course. 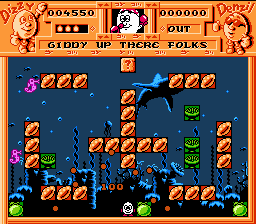 Yeah, folks. Giddy up.
First, say the title aloud as it’s written, punctuation and all. Sounds strange, eh? “Go!” Inevitable pause. “Dizzy Go!” Thankfully, game titles don’t have to make sense, as long as the game is worth playing (sorry Infinite Undiscovery – you fail completely). Go! Dizzy Go! bears a strange, sedated charm. Instead of Dizzy’s typical exploring, Go! has you collecting fruit and avoiding enemies in each of the twenty-five themed levels. The enemies are never really a bother. They’re slow, and unless you go out of your way to get killed by them, you should be fine. Leisurely collect fruit and enjoy Dizzy‘s slow and steady pace.
B-
The following two tabs change content below.