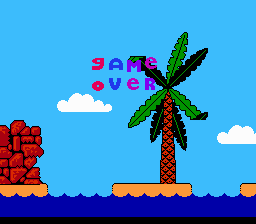 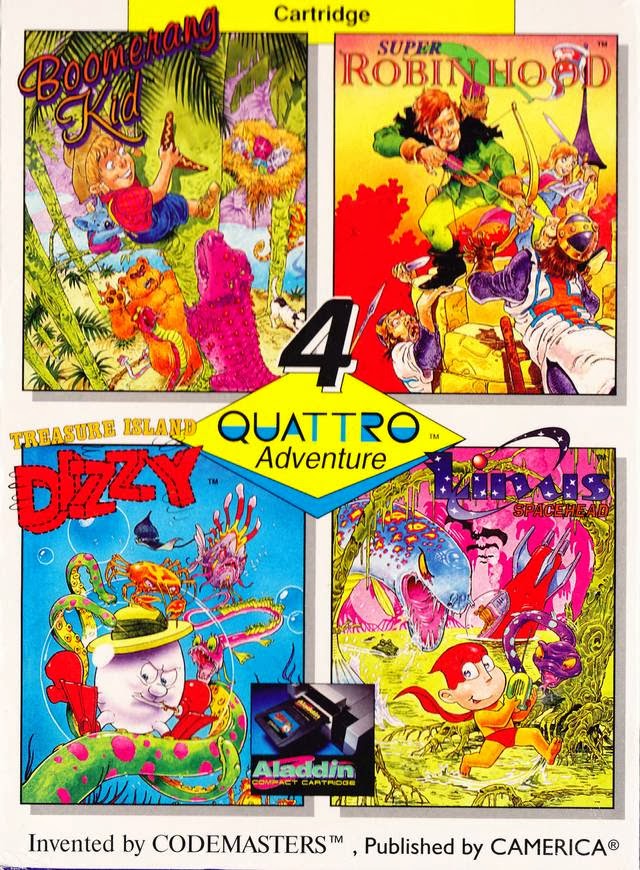 Warning: games may look more entertaining than they actually are.

If Quattro Adventure has taught me anything, it’s that one should always be frightened by American/European multi-carts. Play with caution.
Linus Spacehead

This is the prequel to the stand-alone game Linus Spacehead’s Cosmic Crusade and, let me just say, I can’t believe the world contains two Linus Spacehead games (Lord help us if I find out there are more). Linus Spacehead is a poorly designed, visually unappealing character and that’s the least of his worries. All he can do is jump badly and avoid enemies. He can’t punch, he can’t shoot guns or lasers, he can’t handle weaponry of any kind. The main character of any platformer should be able to wield some sort of death-bringing item, but if he can’t, what happens? Each level is bland, short, and brings with it unfulfillment and ill will towards mankind. Linus Spacehead is absolutely worthless.
F
Super Robin Hood 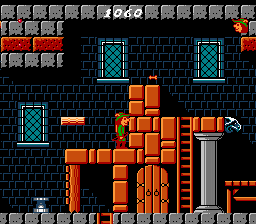 Robin Hood smokes some opium, doffs his cap, plays his lute, collects a hundred rings, and becomes Super Robin of Hood. Too bad he’s locked in the dungeons of Nottingham Castle, armed only with his bow and arrow. Collect the treasure in the dungeon to… escape? Collect treasure for the sake of getting rich? Robin Hood controls decently, but exploring the dungeon feels like a crapshoot. Keys open up paths the second you collect them, but if you don’t keep track of every barrier, you can quickly become lost. Super Robin Hood is no Linus Spacehead, thank the good King Richard, but it’s nothing to get excited about either. One question: after the Sheriff of Nottingham locked (Super) Robin Hood in the depths of Nottingham Castle, I wonder if he cackled, “Where’s your merry men now, Hood?”
C-
Boomerang Kid

If this so-called “Boomerang Kid”‘s shtick is boomerangs, wouldn’t it stand to reason that the kid actually uses boomerangs? Well, push those thoughts of logic directly out of your brain. Boomerang Kid collects boomerangs in one-screen stages of suck-ulence. Much like Jumpman in the original Donkey Kong, if Boomerang Kid plummets more than a couple inches, he dies. If he touches anything, he dies. No weapons, just like Linus Spacehead. Even after you collect the boomerangs, you can’t use ’em. So… they’re just gonna hang on a wall as a mantel piece? Not in my house.
F
Treasure Island Dizzy 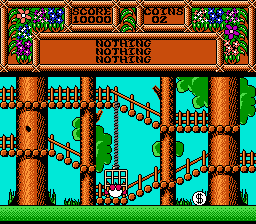 Dizzy the Egg, Linus Spacehead, Boomerang Kid, Super Robin Hood. It is clear to me that Codemasters desperately wants a mascot, yet continues to find itself unsatisfied with their creations (despite unleashing them on the public with wanton recklessness). Dizzy is probably my second least favorite Codemasters character next to Spacehead, but at least his games feel somewhat realized. Treasure Island Dizzy, like the other Dizzies, is a bright exploratory adventure that has the egg analyzing his surroundings, picking up items, and avoiding anything and everything that might give him a good crack. At least Dizzy’s inability to use a weapon makes a slight amount of sense. He was built to investigate, to reason, not to destroy. Treasure Island Dizzy isn’t eggs-cellent, but it’s the best game on this doomed Adventure.
C+
The following two tabs change content below.