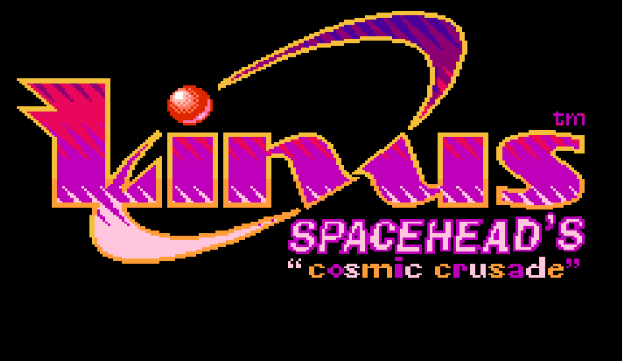 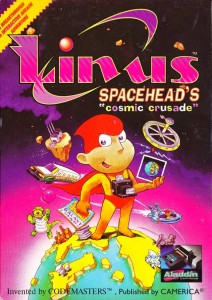 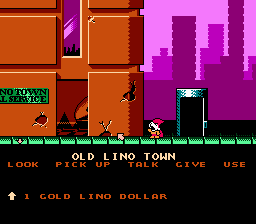 This is the tolerable part of the game… 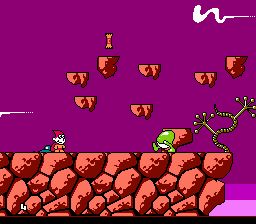 It all spirals downhill from here.

Codemasters typically excels with the majority of their unlicensed games, especially Bee 52 and Dizzy the Adventurer, but Linus Spacehead deserves every bit of your contempt. It’s slow, it’s ugly, and the main character is about as appealing as Lester the Unlikely. The mechanics behind the game – one part point-and-click, one-part side-scrolling action – are intriguing, but executed poorly. In the point-and-click areas, Linus controls as well as you’d expect, but in the action stages, it feels like he’s on the moon. Not only is our hero a slippery customer (tripping on his cape, perhaps?) but sometimes when you jump onto a platform, he’ll jump again for no reason at all. I tried to figure out why the double jump occurred at random times, but there was no pattern. Sometimes Linus just likes to show off his jumping skills, even when you only press ‘A’ once. I’ve never seen this stupid action performed in any other side-scroller and, as you can imagine, it causes you to die a lot. Also, it’s strange that Linus is a superhero, yet he has no weapons. You can jump over enemies, sure, but… he’s a superhero! Give him a death ray or something! And what’s with the horrible purple looking backgrounds, and brash obnoxious music? Perhaps the only bright spot is the goofy writing. Codemasters seems to know that their hero looks ridiculous and makes fun of him on several occasions. Despite Linus being a poorly conceived character, Cosmic Crusade could have been a worthwhile attempt to mesh two genres together. Instead, it’s just a mesh.
D
The following two tabs change content below.