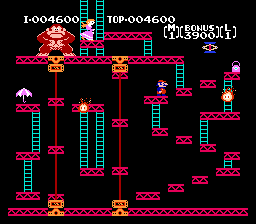 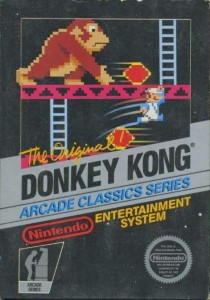 It’s  lame that Nintendo put an image of Mario circa Mario Bros. 1, as opposed to the original Jumpman image featured below. Other than that, it’s classic black-box, baby. 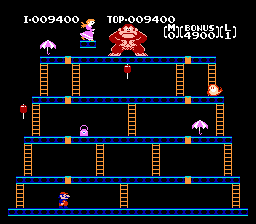 I don’t know if one can overestimate the impact the original Donkey Kong has had on games. Here’s a few facts that most everybody already knows:
So yeah, without Donkey Kong, Mario, platformers, and the console gaming scene as we know it today may have been postponed. I won’t say these things would have never happened, as I believe it would have been inevitable, but the release and success of Donkey Kong made them happen faster.
The game itself is still fun today, although it is very much a product of its time. Jumpman jumps and climbs and maneuvers his way around three very small levels (for whatever reason, the NES release omitted the cement factory level from the arcade game) to reach Pauline at the top. Once you beat these levels – and if you’re any sort of gamer, they should only take you about five minutes – you play them again and again and again, with the momentum of the enemies increasing each playthrough. Despite Donkey Kong being one of the first examples of a platformer, its identity is still very much tied into the point system of late 70s, early 80s arcade games. The point is to, well, get points, not to reach the end of the game. The problem that I think Donkey Kong has now – and I think Nintendo tried to address by releasing Donkey Kong ’94– is that it feels stuck in limbo between a platformer and a points-based game, and it doesn’t really succeed well at one or the other. This is not to say that I think the game is bad or that its impact is lessened by this fact. Donkey Kongwas treading new ground and Miyamoto was ahead of his time by trying to throw an honest-to-God story in the game. But playing it thirty years (!) since its release in the arcades, it’s very obvious that it’s suffering from an identity crisis. Does Donkey Kong want to be this new adventure-type game that’s never been done before or does it want to uphold to the tried-and-true points based method of progression? Let me know in the comments section if you think I’m overstating this or if you think there’s merit to my madness.
I’m grateful for the existence of Donkey Kong even if I don’t feel that it has aged well. It put Nintendo on the map, and without Nintendo, many of my and millions of others’ greatest gaming memories would not have been created. For that, I can only give the maddest of props.
Impact: A+
Actual game: B-
One of my favorite game sound effects of all time is Jumpman when he walks. Priceless.
The following two tabs change content below.