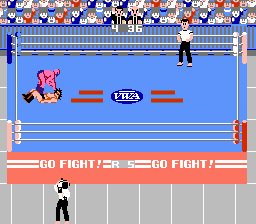 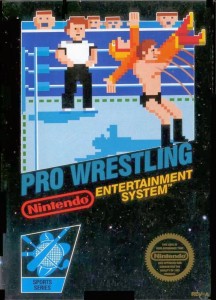 One of the best, most hilarious black box covers.

Say it ain’t so, Starman!

Nintendo covered just about every sport on the NES. From ice hockey to baseball to tennis to football to soccer, and yes, even wrestling. Pro Wrestling isn’t as crazy as the WWE nor is it as boring as authentic wrestling. It’s the perfect blend of surreal and natural. There are zany characters like The Amazon (Creature from the Black Lagoon), Starman, and my personal favorite, Kin Corn Karn (he’s labeled as Korean and Japanese typically don’t like Koreans, hence the crazy name?), but there are also realistic moves like the Piledriver, the Back Drop, and the Lariat. All of the wrestlers get a couple character-specific moves, as well. Stay away from the Amazon’s Outlaw Choke! It’s a doozy!
If you’re hoping to be the best wrestler who ever was, you’re in it for the long haul. You start out ranked fifth. With each match you win, you move up and eventually battle King Slender, the VWA (Video Wrestling Association) Champion. Defeat him and you get to carry the VWA title proudly!… through ten more matches, twice with each of the five selectable characters. After these matches, you will fight Great Puma, supposedly one of the hardest boss battles on the NES. I’ve never gotten to him personally, but he sounds about as tough as Tyson on Punch-Out!!; greenhorns and weak sauce jabronis should shut their mouths and stay in their seats. If each Nintendo-produced sports game were to wrestle in the VWA, Pro Wrestling would come out on top. Whereas Baseball and 10-Yard Fight feel sterile and hollow (despite my love for the former), Pro Wrestling exudes personality and character. A winner is it.
B+
The following two tabs change content below.