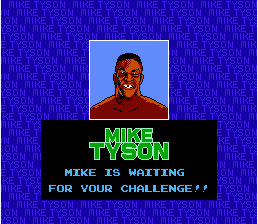 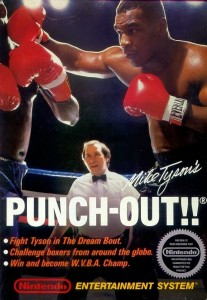 The ref seeks to be as white and nerdy as possible. 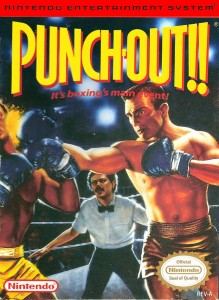 After Mike Tyson’s contract with Nintendo expired in 1990, he was replaced with Mr. Dream. And what a dreamboat he is. 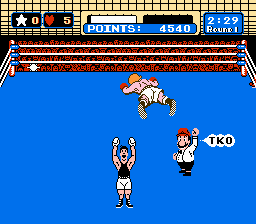 Glass Joe, in his favorite position.*

Dozens of boxing games have power gloved their way through console gaming over the years, but the Punch-Out!! series bests them all. It’s the perfect mix of humor, timing exercises, and an amazing sense of accomplishment. The ridiculous stereotypical boxers never fail to make me chuckle (Soda Popinski? More like Vodka Drunkenski, amirite brahs!), and learning, or in my case, re-learning how to beat opponents is never less than thrilling. Taking down Mike Tyson/Mr. Dream after many, many failed attempts might even go down as one of the greatest moments in anyone’s catalogue of gaming memories. Other boxing games might be more realistic and feature an array of options, but only Punch-Out!! can KO a player’s heart with underdog determination.

Mac gets his hustle on in a pink jumpsuit.*

You are Little Mac, a shrimpy minor league boxer with aspirations of greatness. Only his coach, a former heavyweight puncher named Doc Louis, believes in Little Mac. What Mac lacks in both size and strength (some of his opponents shoes are as big as Little Mac himself – just check out Piston Honda when he’s laying down!), he makes up for in courage and a discernment that allows him to read other player’s weaknesses. The best time to attack is almost always after your opponent’s main move. Your opponent will always blink during their main attack, indicating that the time is nigh for Mac to dodge the oncoming punch, and then blindside his opponent. Both Mac and his opponent have a stamina meter, which decrease every time they’re hit. Mac alone has a heart meter that enables him to throw his signature uppercuts, but should his hearts deplete, he will only be able to dodge, not punch. Once Mac dodges a few attacks, his hearts come back, but Mac himself is still weakened. After this point, it won’t take much to put him down, so proceed with caution. Should Mac be knocked down, he can get back up by repeatedly pressing ‘A,’ but only three times. After thirteen exhausting and challenging bouts (I hate you, Bald Bull, and your later counterpart, Crazy Bull), Mac faces the fight of his life, M. Tyson/Mr. Dream. Avoid the dreaded Dynamite Punches and a winner is you! 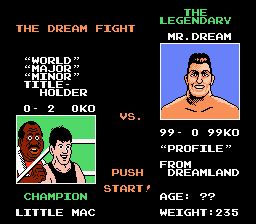 Get out of here, you undeniably good looking man! We want Magic Mike!*
Some of the less devoted might see Punch-Out!!as nothing more than memorizing, and reacting to, a series of timed moves. Such a statement is understandable, but it fails to comprehend the rush that comes from taking on each fighter. For a relatively simple arcade game, Punch-Out!! has a surprising amount of depth and replay value. Like the NES’ best games, it’s easy to pick up and play, and difficult to master. May we as gamers continue to learn from its greatness.