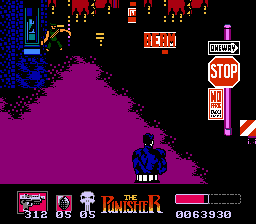 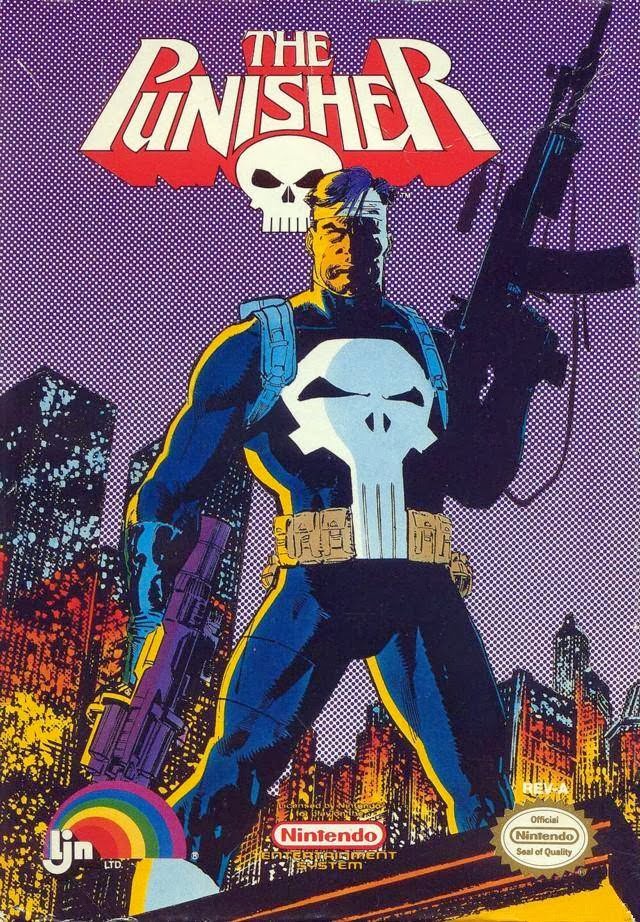 Never shoot on an upset stomach. 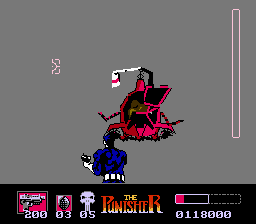 Frank Castle has walked a hard road. Vietnam tours are grueling enough, but finding your family murdered would put any man over the edge. Enter Castle’s alter-ego, the Punisher, and his thirst for bloody justice. Outside of some bare-bones origins, I know little about the Punisher. I’ve never read any comics nor seen any films. My only experience with the Punisher is, uh, The Punisher, by the unholy publishing/developing duo, LJN and Beam Software. Strangely, The Punisher is one of their better games, thanks to decent controls and unwavering action. Is it good? By no means. But it’s playable and, given this duo’s track record, that’s all I need.
The Punisher is an automatically-scrolling shooting gallery of thugs, lowlifes, and end bosses from the comic (I assume). On the menu screen, select one of three bosses you want to take down (Hitman, Jigsaw, Sijo, etc.). Each boss has two scrolling levels, filled with enemies, followed by one boss battle. In each level, the Punisher stands at the bottom of the screen shooting enemies that appear, while the screen slowly scrolls to the right; think Hogan’s Alley with more crack pipes. Enemies appear from the left and the right. They’ll knock out windows, they’ll jump down from the sky. Some shoot right away, others strut into the scene. Shoot ’em all and pick up any items that may drop, like rockets, ammunition, or health. Avoiding the enemies’ shots can be tricky, thanks to the Punisher’s slow movements. Learn each enemy’s shooting pattern and avoid their shots or move in for the kill accordingly.
The Punisher has terrible graphics, no music (except for the occasional guy on the saxophone), and repetitive gameplay strung out over twelve surprisingly long levels. Despite these negatives, the game is consistent. It does what it does – shooting, not thinking – well enough to make you see it through to the end. I might be disappointed with this brainless interpretation were I a Punisher fan. Please understand I was expecting torture, not harmless mediocrity.
C
The following two tabs change content below.