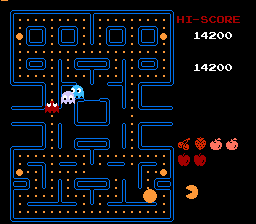 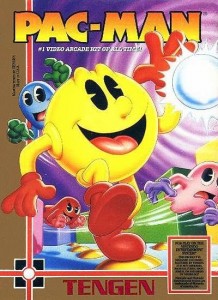 This is probably the version you didn’t play. 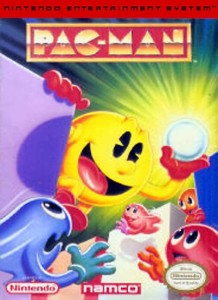 Pac-Man shows the ghosts that chasing him is not the path to enlightenment.

Pac-Man was the first recognizable face and the first mascot in all of gaming. Before Big Pac, games like Pong, Space Invaders, and Asteroids captivated millions, but they lacked personality. Pac-Man had memorable characters, cutscenes, and most importantly, addictive gameplay. Gobbling pellets and fruit while being chased by ghosts was an incredibly weird and captivating concept in an era of space shooters and Pong rip-offs. Because of Pac-Man’s insane popularity, he received his own cereal, a short-lived cartoon, and even a hit single. Home ports too were inevitable, and there’s hardly a system out there that doesn’t have some form of Pac on it. On the NES, Pac-Man was released twice: once by Tengen illegally in 1987 and once by Namco in 1993. Unlike Ms. Pac-Man, both versions of Pac-Man are exactly the same in every way. Bare-bones gobbling at its finest, with the option for a second player (alternating, of course). I can’t attest whether all 256 levels are here, as I’m not that great of a player, but I’m assuming they are. The NES version is no replacement for the arcade, but it’s a far-cry from the abomination that was the 2600 version. Like “Thriller,” “The Godfather” or “Star Wars,” Pac-Man was a social phenomenon that really was as good as the hype. Thirty-two years after the game’s release, the little yellow half-eaten pizza remains one of the most memorable mascots in all of gaming-dom. Good show, Pac. Good show.
A
The following two tabs change content below.