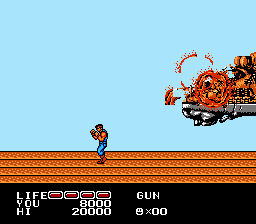 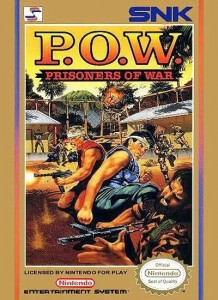 What a tease! Prisoners of War isn’t two-player at all! 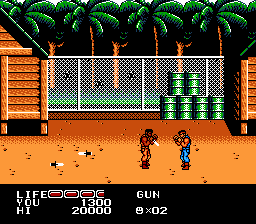 Look at all those spare knives just laying there, begging to be thrown at someone!

SNK have a real obsession with war, don’t they? They’ve developed the wretched Ikari Warriors trilogy, Guerilla War, the Metal Slug series, and today’s review, Prisoners of War. The aforementioned games are of varying quality, but they share a couple unifying factors: they’re all cartoonish takes on a very serious subject, and they’re hard as hell. Prisoners of War, in particular, deals out ridiculous amounts of punishment, but the experience is well worth the pain.
Prisoners of War is your standard 80s beat-em-up, chock full of one-man-against-every-terrorist-organization-itis, body count higher than the population of third-world countries, and a beyond thunderous soundtrack. After your escape from prison, you punch, kick, jump-kick, stab, shoot, blow up, and bad-ass your way to victory. Different variations of enemies include the Guys that Run Into Your Fists, Stabby McStabberson, the Knifing Gymnasts, Biker Jerks, and many more! You start out with four bars of life, but oh my, they reduce quickly. A couple punches can be brushed off easily, but one quick slash and your life is reduced by half and, like in real life, a grenade blast will kill you completely. In other words, be extra careful poking through this enemy base. Every person here wants your blood and you only have three lives to spare. Continues, sure, but these are long, grueling levels intended to waste ordinary men. Thankfully, you’re a prisoner of war, and getting captured was your plan all along, right? How else would you topple a fascist dictatorship if not from the inside, right? RIGHT?!
B
The following two tabs change content below.