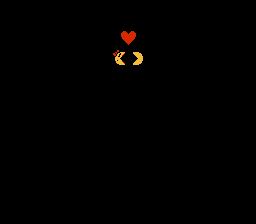 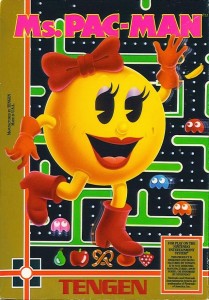 This is the cover that I remember seeing at the video store as a child. Little did I know that I was breaking the law simply by staring at it. 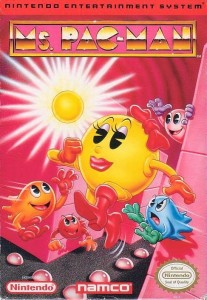 This is the cover of the version released (legally) at the tail-end of the NES’ life-cycle. Some poor timing, Namco, and too much pink. 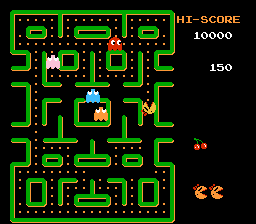 DEVELOPER: I couldn’t find solid evidence as to which company developed which port, but supposedly, Namco developed Tengen’s version, while NOW Productions developed Namco’s released version. To complicate matters further, NintendoAge lists the developer for both games as Graffiti – a company I have never heard of. Basically, I don’t know.

Perhaps the most interesting thing about Ms. Pac-Man on the NES is that there are, in fact, TWO Ms. Pac-Man‘s for the NES. One was an unlicensed version released by Tengen, without Nintendo’s blessing, and one was a licensed version released by Namco. If I can digress for a moment, Tengen as a company was quite the rascal, and a fairly consistent thorn in Nintendo’s side from the get-go. They created their own chip to bypass the NES’ lock-out chip (the chip used primarily to prevent companies from breaking Nintendo’s strict licensing rules), and once they began releasing unlicensed games, Nintendo took them to court for copyright and patent infringement. Later, the two companies sparred in court again, this time over Tengen’s version of Tetris. Nintendo won both rounds, and while Tengen made games for other systems, I wouldn’t doubt that those two lawsuits were expensive and ate up a lot of time and profits. By 1994, Tengen was gone, though their parent company, Atari Games, remained technically alive for at least another decade.

It’s a shame that Nintendo was such a strict regulator over their system because Tengen did release some quality stuff, and the Ms. Pac Man port is among them. Instead of porting the arcade game to the NES (we’ve all played the game right? Bow-tie wearing half-eaten pizza creature loves eating pellets, fruit, and pretzels, while multi-colored ghosts chase her ceaselessly? Beautiful, moving on), they added some new features. The Pac-Booster can be toggled on, off, or you can have a limited amount. It lives up to its name, boosting Ms. Pac Man along when she’s about to get eaten by ghosts. You can also choose between different sized boards, like Mini, Big, and Strange. Each of these boards adds a twist to the challenge, and for hardcore players, added variety. If you like Ms. Pac Man, I’d argue that the Tengen version is the definitive home port outside the arcade, at least at this time. It moves quickly, it adds variety to an old favorite, and it really replicates the feel of the original arcade game. 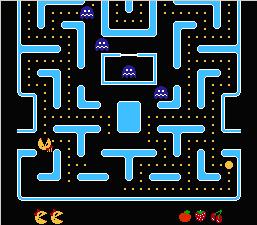 Ms. Pac-Man sure does fancy a gobble!*

The Namco-published version, on the other hand, released three years later then Tengen’s version and is, astonishingly, much harder, slower, and bereft of options. You get the standard arcade version of the game, a difficulty setting, and you can choose between one-to-two players, that’s it. Supposedly, both versions were developed by the same company, but I have a hard time believing that – unless Namco stripped down Tengen’s version.

Bottom line, Ms. Pac Man is a classic. Most of us probably own or have owned a copy at some point in our life, and if not, we’ve probably played the game a butt ton. Both versions for the NES replicate Ms. Pac Man, but I admire Tengen for boosting the game with some content – a ‘special edition’ if you will – and not just releasing a lazy, bare-bones port.
TENGEN: A-
NAMCO: C

*thanks to Console Classix for this screenshot.