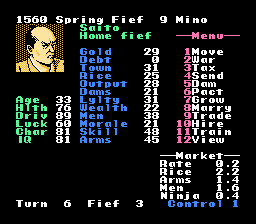 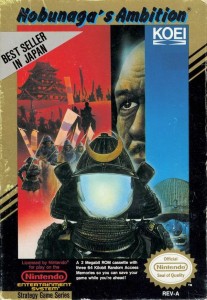 One of my favorite Koei covers. Masterfully done.

Only .4 Ninja?! How can I expect to take over Japan with less than half of a ninja?!

Who wants to ride shogun, kids? Nobunaga’s Ambition takes Koei out of their beloved ancient China and into a strongly divided 15th and 16th century Japan. The Hundred Year War is raging. The daimyo or “lord” Nobunaga has all but conquered Japan, but other daimyos – who are in control of different feudal states or “fiefs” of Japan – are vain enough to challenge his strength. Choose from one of two scenarios: choose to rule as a daimyo from one of seventeen fiefs, or one of fifty fiefs. If you choose the latter, be prepared for the longest game of “Risk” you never wanted to play; the former is a little less brutal, but still lengthy. Once your fief has been chosen, you maintain it: keep your citizens and soldiers happy, make your rice fields flourish, and of course, expand your reach over other fiefs. If you feel comfortable enough with your supplies and your units, you can choose to go to war with other fiefs. Hesitate for too long, and they will make war on you, so either way, war will be declared. This is Koei, so stats/options are plentiful and overwhelming. In your fief, you have to keep track of dams (if they’re strong, they won’t burst during typhoons), the loyalty of your peasants, and even your daimyo’s health, IQ, and bowel regularity (not really, but it wouldn’t surprise me). You can sign peace treaties, marry other daimyo’s daughters, bribe peasants to your fief, among eighteen other commands. I could care less, frankly, and I’ve explained why in my L’Empereur review. If virtual conquest is something of a pastime for you, however, please look forward to Nobunaga’s Ambition.