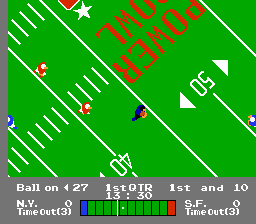 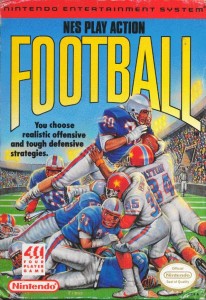 The Power Bowl, brought to you by High Society.

It’s probably wrong for a non-football fan to review a football game, but despite what my John Elway’s Quarterback review would have you believe, I do try and consider the audience for each game I play. Out of all the football games I’ve played for the NES (there have only been about three so far, and I haven’t played what many consider the best, Tecmo Super Bowl), NES Play Action Football feels the most comfortable to someone who knows little to nothing about the sport. The game doesn’t waste time with needless introductions or an overwhelming amount of options. I picked one-player vs. computer, my team (San Francisco), there was a coin toss (I lost), and the game was afoot. After the first play, the game gives you a couple options: you can play offense or defense, take a time out (only three per game), or substitute other players in if your mains (“mains”? sure, why not) are getting tired. Should you choose offense or defense, you get a choice of plays to perform. If you actually know about football, these plays are probably helpful, but I always just picked the one that sounded the best (man-to-man rush? What testosterone-driven dude doesn’t like the sound of that?!). This game was actually sponsored by the NFLPA, so you’ll recognize a lot of late-Eighties, early-Nineties players in there; even I, in my relative ignorance, recognized Joe Montana. Like most sports games, it’s probably best to just grab a couple compadres, kick back some suds, and have at it, especially since you have the option to pit two-on-two. The computer’s fine, but where’s the heart?
B-
The following two tabs change content below.