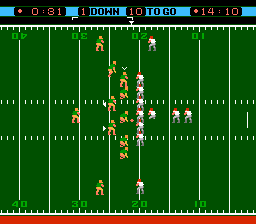 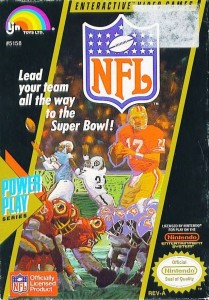 That is one blurry pseudo-painting there. Also, FOOTBALL!

AND I DON’T WANT TO MISS A THA-A-ANG!

I have some readers out there who are sports fans, so let me just say, I’m sorry. While I appreciate the value of sports, they have never held any place in my life, nor will they in the foreseeable future. Out of all the sports held in high esteem by Americans, football is probably my least liked and least understood. I can look at outlines of plays all day, and they won’t make any sense. On the odd chance one of them does, my thought is, couldn’t the players just forgo the play and do their own thing anyway? Is that even possible?
But whatever. ARE YOU READY FOR SOME FOOTBALL?! Unlike NES Play Action Football, which was only sponsored by the NFLPA, NFL Football makes that extra leap to actually be sponsored by the NFL. This means basically one thing: you can pick your favorite teams by name. No more choosing San Francisco or Denver or whatever. Now you can pick the 49ers and the Broncos.
Sadly, such a license could have used a better game. I’m not one to care about player names or stats or anything like that, but shouldn’t a game titled NFL Football have more details than just the team names? More importantly, the passing mechanics are totally shot. The game essentially plays itself for about twenty seconds, until a little cursor tells you which player you’re controlling. After that, you can press ‘B’ to pass and the game will slow down, while you select the player you want to pass to. When you select the player, you press the D-pad and the ‘A’ button at the same time in the direction of the player to finally pass the ball. Can you imagine doing this several times during a play? I couldn’t, and therefore, didn’t. One plus: you can upgrade and customize your team. But if you can’t control them well on the field, what’s the point? NFL Football showed me that I’m really not ready for some football and, even if you’re a person who’s inclined to be, you should still choose a different virtual pigskin.
D
The following two tabs change content below.