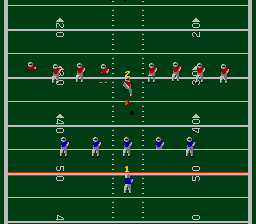 All those extra, discarded “Lost in Space” robots had to go somewhere…

For someone who actively dislikes football, nothing raises the bile like playing a football sim. John Elway’s Quarterback is unfortunately just that, thus I’m not sure whether the game is just bad or whether I could care less. Honestly, I have no idea what’s going on in the game nor do I want to learn the available plays in order to understand a twenty-five year old NES football game. What I do understand: it’s nearly impossible to gain any ground when you’re on the offensive, the players all look like overweight robots, and I didn’t enjoy anything that was going on. When you’re on the offensive and trying to run the ball to the opposite goal line (I’m probably not spouting correct football jargon, bear with me), the players will tackle you. This is nothing new. What is frustrating is my players’ inability to throw the ball to other players. I understand football’s not supposed to be like basketball, but when I aim the ball in a certain direction, I’d like it to move in said direction. If it’s your turn to be on the offensive, after every play, you get to choose another play. These plays have fun names like “Bomb,” “Shotgun,” “Screen,” etc. I get the basic gist of what they’re trying to portray but I have no idea how to actually pull them off. Even if you were to pull them off successfully, I’m not sure how you would know. When you’re in the midst of the brutal ballet, the robotic players just look like piles of pixels. John Elway’s Quarterback confuses and infuriates, which means, for those of us who shun football, the game needs to be played with a handful of antacids or, preferably, not at all.
D-
The following two tabs change content below.