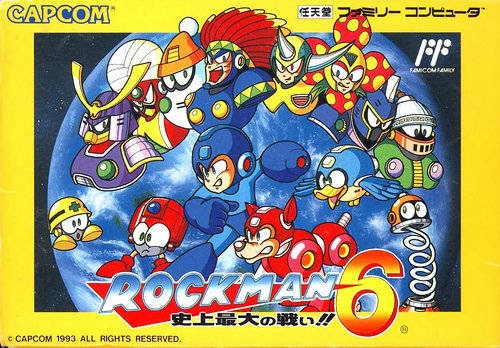 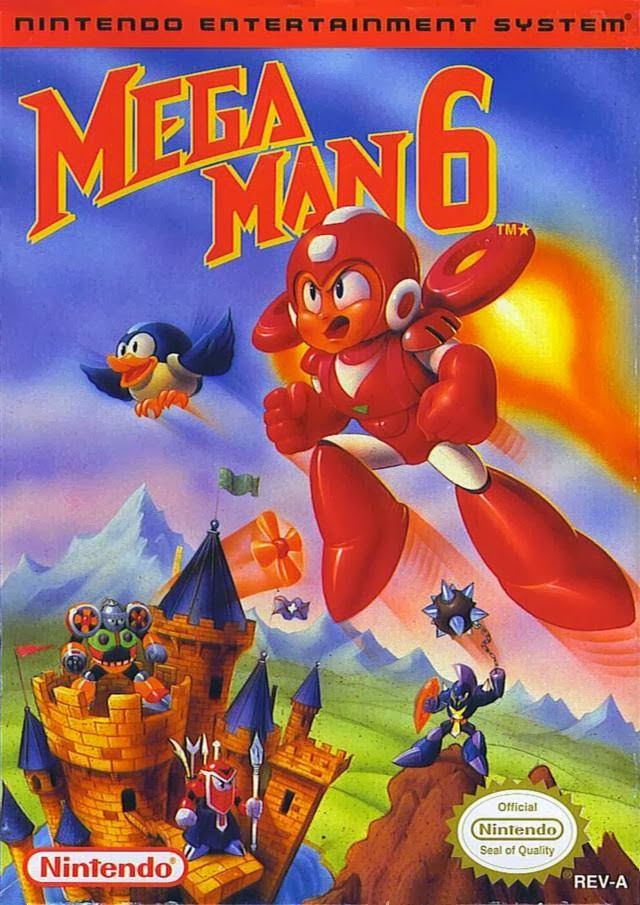 The gang’s all here for the final Famicom entry.

Mega Man VI didn’t just mark the end of the series on the NES: it marked the end of the NES era, period. Very few games would release after it, and despite being a part of a prominent series, many gamers chose to ignore it for its 16-bit cousin, the fantastic Mega Man X. Reports vary about when VI actually came out. Wikipedia and GameFAQS both list its release date around March 1994, while NintendoAge lists the date around December 1993. Though I personally remember seeing – and renting – the game in a Blockbuster in ’93, it doesn’t really matter. Mega Man VI was one of the last NES games to come out in the States, and only thanks to Nintendo’s own efforts; for some unknown reason (I tried hunting down information, to no avail), Capcom had decided not to publish it in America.
It’s really a shame that this game was ignored, though I’m not at all surprised that it was. Even if you were a Mega Fan back in the early Nineties, you were inevitably experiencing burnout and a sense that Capcom should have stopped, possibly with III or IV. While VI is no masterpiece, it is certainly on-par with IV and a great deal more rewarding than the travesty that was V. Capcom saved the majority of its developing mojo for Mega Man X, but Mega Man VI still deserves to be played.

Like the previous entries, Mega Man VI tries to add a couple new features to keep the formula from becoming too stale. Instead of calling out Rush whenever you want to jump higher, swim, or fly across a gap of spikes, now Rush adapts to Mega Man’s body. Rush’s powers allow Mega Man to punch through cracked blocks or fly with a jet pack. The plus side of this is that Mega Man no longer has to refuel the “Jet” or “Pow” powers; plus his look of cute determination as he flies upwards in his jet-pack is priceless. The down side of this is a severe lack of Rush. He’s seen in the transformation screen when you switch between the Rush forms, and that’s it. Beat, however, makes a triumphant or lackluster return, depending on your affinity for the character and his amazing ability to destroy burgeoning world conquerors. In order to get him, you have to beat the “real” bosses in the stages of Yamato Man, Tomahawk Man, Centaur Man, and Knight Man. In these stages, there are two branching paths: one will take you to the clone boss, and one to the “real” boss. Obviously, it takes a little more effort to get to the real boss, but Beat’s not as necessary to VI as he was to V – if you get him, cool, but if not, you won’t suffer. Another new and neat little feature are in-game stats that appear whenever you choose a boss. There’s the typical height-weight information, but it also gives the bosses attack power and defence power, along with their title; for example, “Blizzard Man: Master of Snow.” Nothing too fancy, but it’s a nice change.
“MR. X!! WHY!?”
The story treats Mega Man – and his fans – like complete jackasses. While I like the idea of a robot world tournament because it’s a blatant callback to Capcom’s own Street Fighter II and it makes for more interesting robot bosses, “Mr. X,” the supposed bad guy, isn’t fooling anyone. I can’t believe that Mega Man bought Mr. X’s story about being in control of Wily from the beginning, when he looks exactly like Wily with a beard (equally ludicrous is the picture of “Mr. X” smiling, with his hands above the world). True, nobody is playing Mega Man VI for a gripping soap-opera story, with Pynchon-esque labyrinthine plot twists, but some creativity could have helped VI‘s reputation.

“COME AND FACE MY POWER, MEGAMAN!!”

I’ll probably get flack for saying this, but this particular boss set contains some of my very favorite bosses out of the six NES entries. I’ve always been an advocate for the more ridiculous the design, the more profound the impact (except for Charge Man, who deserves nothing less than a lifetime junkyard sentence). Say hello to:

Since all of the bosses came together around the premise of a world robot tournament, each boss is from a different (and, true to Capcom form, stereotypically represented) locale. Flame Man is from Saudi Arabia (though with that turban on his head, he represents the Middle East), Blizzard Man is from Canada, Plant Man is from Brazil, Tomahawk Man is from the United States, Yamato Man is from Japan, Knight Man is from England, Centaur Man is from Greece, and Wind Man is from China (?!).
If you’ve ever played a Mega Man game, you know what to do: run from right to left, shoot robotic enemies, avoid spikes and drops, and defeat the boss. It’s precarious platforming at its palpitating finest. Here are some off-hand observations/quirky things I noticed whilst traversing the stages of Mega Man VI.

Mr. X foresaw that Mega Man would come after him and decided to build a fortress with about four stages or so. At this point, I wish I could have sat down with Mega Man – had some coffee, a biscotti, and some small talk. I’d ask, “Doesn’t this remind you of anyone, Mega Man? Shouldn’t you be clued in by now?” Mega Man says nothing as he wrestles with the stale biscotti. “Well, just keep in mind that this is fortress #1, alright? Very good,” I say, sipping my coffee as loudly as possible. It doesn’t really matter why Wily tries to hide his identity anymore. He’s a tenacious robot-making/enslaving doctor and that’s that.
The following two tabs change content below.