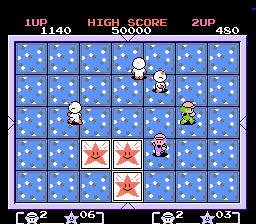 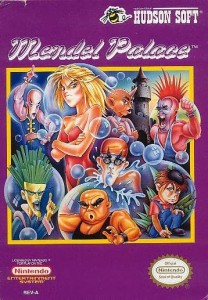 It’s ok to be horrified. 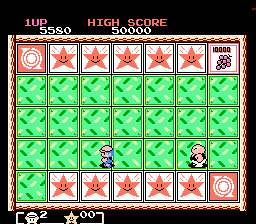 Sumos are slow and heavy, but they can dish out the pain as well as you can.

Mendel Palace is a psycho killer mind trip that could have only been crafted on the NES. A young ragamuffin named Bon Bon is tasked with rescuing his best friend, Cindy, from her dreams where her dolls are holding her captive. Ain’t it always the way? Each doll – ranging from a Sumo to a dancer to a crazy punk rocker – has their own world comprised of ten stages each. Rather than forcing Bon Bon through two hundred stages of typical platformer hell, Cindy’s dolls prefer a more sophisticated approach. Each stage is comprised of 7×5 sliding tiles and little replicas of Cindy’s dolls. Each doll has their own way of moving around the tiles – walking, dancing, bouncing, and even imitating your character’s moves – but your attack is always the same: to slide the panels. Sliding the panels will push the dolls back towards the walls of the playing field. Should they touch the wall, they will explode into bits.
But Mendel Palace is about more than making some evil dolls explode. Underneath the panels are different power-ups, like stars (collect 100 to get an extra life), suns (slides all tiles on the board), moons (turns the entire board dark and fills it with stars). Some of these panels are out in the open, but the majority of them are hidden. However, the more panels you slide to try and destroy the dolls, the more secrets you’ll uncover. There are also blockade panels that can sometimes be breached if you slide them long enough. The worst panel to find, though, is the panel of moving concentric squares. If these panels are showing, enemies will continually regenerate, so slide them back to normal as quickly as possible. Mendel Palace seems simplistic at first, but the deeper you descend into the dolls’ dwellings, the more intense their movement patterns become. Cindy must have played with them rough.
Mendel Palace doesn’t lend itself to a quick explanation, but it’s an easy, pick-up-and-play curiosity. It also happens to be one of the few games made by Game Freak that’s not a Pokemon game. ‘Tis a shame indeed that Game Freak’s only current focus is the Pokemon series. The gaming world needs more well-crafted brain melts such as this.