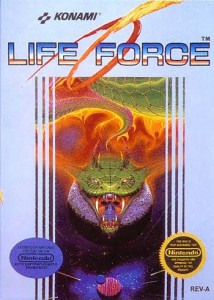 It’s coming for you… 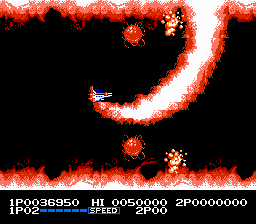 I can’t believe this was on the NES. It looks amazing.

Life Force isn’t just another good shmup that this quest dictates I review. Life Force is an exhilarating, challenging masterpiece that begs to be conquered by gamers who love to be beaten senseless. The level design is glorious, the enemies relentless, the bosses large and magnificent. I wish I could have been blown away by Life Force in 1988 when it first released. Can you imagine seeing the brain or the dragon boss for the first time and thinking, Holy crap, my NES is so POWERFUL? It’s a testament to the developers at Konami that the game remains as amazing as ever, almost twenty-five years later. Life Force might just be the best shooter on the NES.
Life Force might seem like just a spin-off of Gradius at first, even going so far as to borrow that game’s upgrade system. For those who haven’t played Gradius, every time you destroy either a group of orange enemies at the beginning of the level or singular orange enemies throughout the level, they’ll drop an upgrade for your ship. The upgrades range from missiles to lasers to extra firepower, and even a shield or more speed. The real strategy comes in combining your upgrades. For example, I cleaned house through half the game without dying once, simply by having two additional shooters, a missile upgrade, and some extra speed. Like Gradius, once you die, you’re left without your upgrades, but unlike Gradius, the game doesn’t become downright impossible if you’re stuck in the middle of the stage with just a pea shooter. 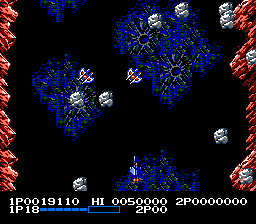 Horizontal and vertical scrolling. Life Force is just that good.
Where Life Force distinguishes itself from Gradius and other NES shmups is the creativity and challenge invested within every level. I’m going to bet I’m not the only one who freaked out upon seeing the flat landscape build outwards towards my ship, mere seconds upon entering the first level. How about in the second level, when boulders start falling from the sky unexpectedly, and you hope to God you have a speed upgrade so you can weave between them? Or having to shoot your way through layers of space foam that builds itself back up behind you? I could wax eloquent about this game’s surprises for pages and pages.
You don’t need any other reasons to play this game, but here’s a couple more just for kicks: alternating horizontal and vertically-scrolling stages, and two-player co-op. The former might have been the first time a shooter attempted to have both and succeeded, and the latter is just crazy. The game is actually designed around two-player, as one can see from the branching paths in each level. It’s much harder, though, because power-ups are scarcer and must be used wisely. Still, both are excellent features to an already excellent game.
I truly don’t know what else to say about this game, except that anyone who considers themselves a fan of retro gaming should play it right now. Life Force might not be a perfect game, and it certainly isn’t for everyone, but it’s one of Konami’s crowning achievements on the NES.
A+
The following two tabs change content below.