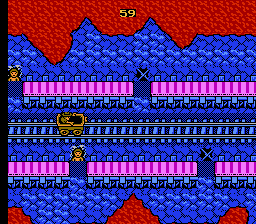 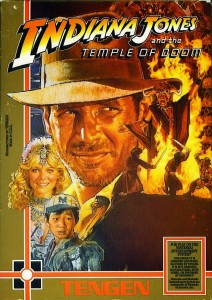 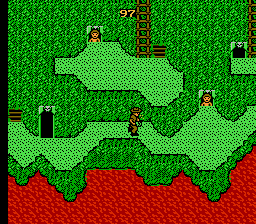 A lot of effort went into making those children look as soulless as possible.

The film “Temple of Doom” is generally considered the weakest of the original Indiana Jones trilogy, but as a game adaptation, I’m happy to report that Temple of Doom is, hands down, the best of the three Indy NES games. It has a ramshackle, devil-may-care spirit to it that is far superior to the sludgy, murky qualities of the two Last Crusade games. I wouldn’t call it a good game necessarily, but it is a game that does whatever the hell it wants and, surprisingly, succeeds on its own terms.
Here’s the thing: I’m not exactly sure what I was supposed to be doing in Temple of Doom. The majority of the game has you collecting kids (dozens, if not hundreds of Short Rounds???) peering out of dark, cavernous holes. Once you collect the children, swords, guns, keys, and any other random item you can think of will pop up in the child’s hole for you to collect; the kids have an arsenal with them, in other words. What’s confusing is that the pause screen states how many kids you need to collect for the level, but even if you don’t collect that number, you can still progress. As far as I could tell, aside from the keys, these items – especially the weapons – are pointless. When you press ‘pause’ on the menu screen, it will show your arsenal of acquired goods. I tried to equip a sword or a gun to no avail, so I’m not sure what the point of collecting them is other than to get you points. The majority of the levels or “waves” (hearkening back to the arcade games of the early 80s with that term!) involve going between mine cart sections (where you jump from mine cart to platform and back again) and caves surrounded by lava. These environments can grow boring to look at, but they certainly fit in with the movie’s theme. As I hinted at earlier, keys are about the only item worth a bullplop. Use them to unlock the wooden doors and move on to the next level. What’s the point of collecting kids, if all you need is a key to advance? What’s the point of collecting items if they don’t do anything other than look pretty and add to your cool factor? Does it matter? It’s a Temple of Doom, not a Temple of Personal Accommodation.
C-
The following two tabs change content below.