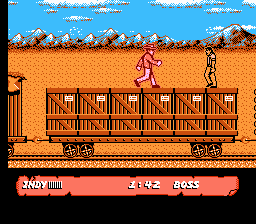 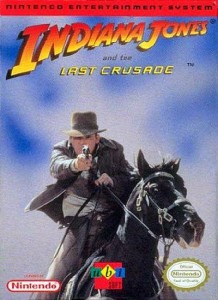 Why be creative when you can re-use the exact same background that Taito used for their equally toxic take on “The Last Crusade”? 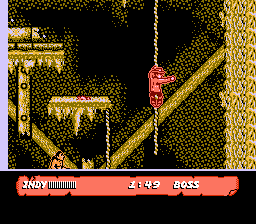 Put your mind at ease: Indy can, and does, punch air in this game.

A theory: Ubisoft played Taito’s incarnation of Indiana Jones and the Last Crusade and they declared it “bad, but not bad enough.” A mere three years later, near the end of the NES, Ubisoft decided that, yes, what the gaming world wanted – nay, needed– was yet another abominable Last Crusade game. How else to explain this nonsensical dreck? And yes, I would love an explanation, Ubisoft. You should have let sleeping dung lie. SLEEPING DUNG!
Simply put, The Last Crusade (1993 Remix) is nigh unplayable. It’s not that the controls are bad. In fact, the controls are a marked improvement over the original Last Crusade. No, what ravages this particular game are the monochromatic, bleached graphics; the cheap shots the enemies take; the lunging backwards every time Indy gets hit; the “there for no reason” uber-short time limit; the too-low life bar; the boring, meandering levels; the overblown character model for Indy himself; the way life depletes as you’re falling through the air. These are all defining characteristics of the first level, which thanks to those attributes, was also the last level I played.
Perhaps there is no way to explain this game’s existence properly. Certainly Ubisoft has moved on to greener pastures, lined with Rayman corpses. Allow me to summarize, then: Last Crusade is a whirlwind of poor developmental choices, undoubtedly rushed to a dying market to satisfy absolutely no one.
F
The following two tabs change content below.