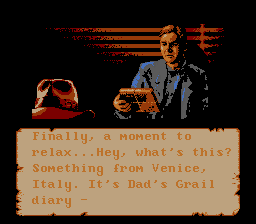 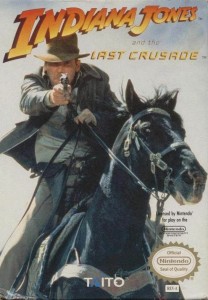 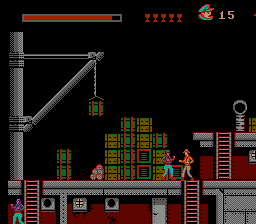 Indy’s always had it out for the Naval Reserve.

Like an unearthed piece of dinosaur dung that still retains its pungent scent, so too does this twenty-year-old Indiana Jones game maintain the crappiness bestowed upon it by Software Creations. Is it really that hard for action games based on Spielberg movies to be good? I suppose you could brand The Last Crusade an “action-puzzler,” but that would imply that the game contains any true action besides overly repetitive beatdowns on regenerating thugs; or that the puzzles presented here indeed have solutions. Just try the level where you have to rescue Indy Sr. from a castle divided into five different, obnoxious sections, and you’ll be re-thinking the idea that “The Crystal Skull” was the worst Indiana Jones outing. Tedium and frustration might be endurable if the control scheme didn’t feel like it was shoved under a cement mixer. It’s been a long time since I’ve had to rant about the assignment of ‘A’ as the ever-eternal jump button, but I’ll gladly do it again. You shouldn’t have to press both ‘A’ and ‘B’ to jump in a game. Ever. Nor should a nimble protagonist, like Indy, feel like he’s trudging through mud whilst dealing with a painful hemorrhoid problem. If you’re smart, you’ll whip your enemies instead of beating them with punches or kicks, but the enemies have to be lined up correctly with the whip in order for them to get killed. Actually, if you want to be really smart, you could drive out to the New Mexico desert with a shovel, and bury this game in a landfill next to all of the Atari E.T. cartridges. Spielberg would want it that way.
F
The following two tabs change content below.