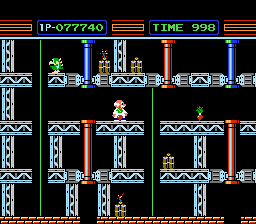 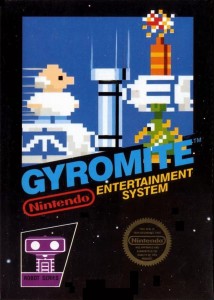 Eat some turnips, collect some dynamite, and be in bed before the sun goes down. That’s Gyromite!

Gyromite is commonly known for being one of the only two NES games to work with the short-lived peripheral, ROB the Robot. To the public, ROB (short for Robotic Operating Buddy) was proclaimed by Nintendo as a “friend” that would play games with you if you didn’t have a second player. In reality, it was a mostly useless pack-in included with the original NES consoles so that Toys ‘R Us (among other retailers, I’m sure) would sell them. In our current era, it would be insane to think that retailers wouldn’t stock gaming consoles, but in 1985, this was very much the case. The gaming industry had all but disintegrated from 1983-1985 for a myriad of reasons, including a glut of barely indistinguishable consoles and over-priced crappy games from disreputable third parties. Thus emphasizing ROB in the beginning of the NES’ lifespan was a shrewd move on Nintendo’s part. Without him, America’s largest toy retailer might not have stocked the console, leaving one to wonder if the NES would have rejuvenated the gaming industry as quickly it did. I’m of the mind that the system was too brilliant not to garner attention, regardless of where it was sold. In the wake of the crash, though, Nintendo’s thinking made sense. ROB, clunky and slow as he was, did his part to help usher in the revitalization of the gaming industry as we know it. I for one thank him for it. 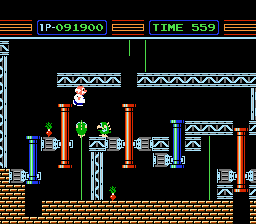 With his life’s work complete, Professor Hector decided it was time to end it all.
Without ROB, Gyromite is a singular two-player co-op experience. In Game A, the first player controls Professor Hector, while the second player uses the ‘A’ and ‘B’ buttons on the second controller to lower/raise the red and blue columns that are obstructing the Professor’s path. Since the Professor lacks any jumping skills (bad knees resulting from too much lab work, no doubt), the columns can also be used as ascending/descending elevators. Hector’s goal is to avoid the green bug-like Smicks and collect piles of dynamite strewn about the stage. Once all the dynamite has been collected, move on to the next round. The challenge usually stems from collecting the dynamite in the proper order. In later levels, there are areas where you become trapped with dynamite still left to collect and your only option is to kill yourself or restart the level. The Smicks are hardly challenges: they can be killed by squishing them with columns, and distracted with randomly-placed turnips. Game A plays like Lode Runner with a pinch of Donkey Kong, which is just strange enough to be a good thing. None of the forty stages are overly difficult (since Nintendo’s intention was for you to play this with ROB, they couldn’t be), but it has that surreal early-Nintendo vibe that can’t be replicated.
Game B is one-player and much more simplistic. Professor Hector is sleepwalking of his own accord, and rather than control him, you lower the columns as he makes his way to bed. That’s it. It’s amusing for what it is, though not as entertaining as Game A. 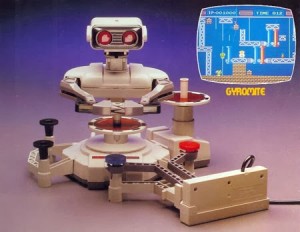 ROB, take the wheel- er, gyro!
If you’re going to attempt to play Gyromite with ROB, prepare for a cumbersome experience. In theory, ROB uses gyro discs to lower/raise the columns that are obstructing Professor Hector’s path. Sounds simple enough, but the process is maddening. First, lower the second-player NES controller into an extendable phalange that attaches to ROB’s front. At the top of this extension sits a blue bumper and a red bumper that, once lowered, will press the ‘A’ and ‘B’ button on the second-player controller. The only way to lower the bumpers are with gyros that ROB moves onto them. While Gyromite is in play, press ‘Start’ to switch to control of ROB; every time you want to move ROB, you have to press ‘Start.’ Once you’ve done that, control ROB’s movements (Up, down, left, right) with the D-Pad, and open and close his hands with the ‘A’ and ‘B’ buttons respectively. Assuming the gyros are in their correct starting positions, twist ROB around to face them, open his arms, take the gyro, close his arms, lift them up, then circle him back to face the red/blue bumpers. Place a gyro onto the blue/red bumper and the blue/red column will lower during gameplay; lift the gyro off the bumper and the column will raise. Oh, and don’t forget to press ‘Start’ before you control ROB every single time. It’s ridiculous to describe, and just as ridiculous to attempt. Stick with a real person.
No doubt ROB was a novelty, invented for the greater good of promoting the NES in America. In that sense, he was a resounding success, even if his skills as a video-game assistant will forever be in question. Gyromite, however, is a unique puzzle excursion that – praises be – doesn’t require ROB’s involvement to be enjoyed. On a system that would define the co-op experience in later years with games like Double Dragon II, Contra, and TMNT II, Gyromite is one of the most distinct two-player games on the system; especially since it was never intended to be.
Gyromite: B+
ROB the Robot – Camp Value: A
Actual Game-Playing Ability: F
The following two tabs change content below.