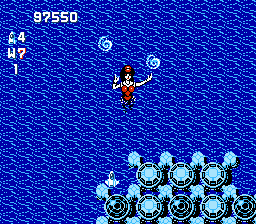 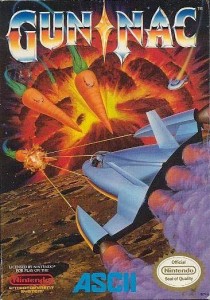 When the Mighty Carrot Poobah attacks, only Gun Nac can complement a delicious Cobb salad with his organs! 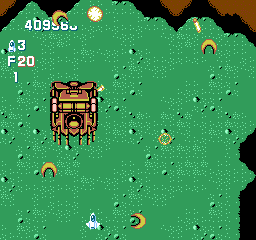 Rest assured, large mechanical objects are but a small concern compared to the deadly carrot stabbings.

I’m going to go ahead and assume that there was no English translator between the release of this game in Japan and America. Hence the awkwardly titled, mildly entertaining Gun Nac. If you’ve followed my blog for awhile now, you know that I love almost all shoot-em-ups. It’s not that shmups are even my favorite genre, but rather, they are my favorite genre to play for this quest. Turn on, kill kill, turn off, what’s not to love?
The good shmups are never that simple, though, and neither is Gun Nac, although its decided value depends on your fondness for old shooters. Like many other NES shmups, Gun Nac starts off slow to get you used to the various weapons dropped by enemies, but by the second level, the difficulty ramps up quickly. I acquired four lives (for a total of six) and a bad mutha ship in the first level, only to have it all steam rolled away from me by the denizens of the horrible Lava Planet i.e. the second level. The difficulty level, the relentless speed, and the variety of weaponry make this game a solid shmup, but outside of those standard “solid” requirements, there’s nothing here that sets this shmup apart from, say, Gradius or Life Force. The different planets you visit are all pretty bland, graphically speaking, as is the design of the ship and the enemies. Granted, when you have your favorite weapon charged to the max and you have two additional wings blessing you with extra firepower, all that matters is blowing things to oblivion. Similar to Gradius, though, should you die in the heat of battle, good luck regaining your ground. Pea-shooters don’t cut it when you’re trying to fight volcanoes, oil refineries and random flying monstrosities. Despite the sub-par visuals, all classic shmup fans should try this game, if only to say “Huh. Now I can say I’ve played a game called Gun Nac.”
B-
The following two tabs change content below.